Creativity and craft: meet the people who built Chorus 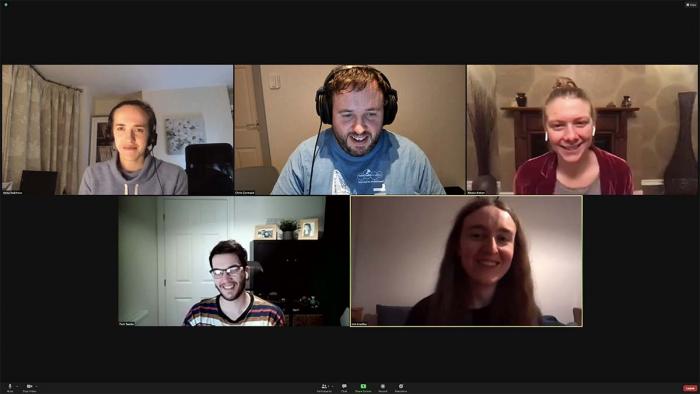 It's often been said that we don't realise the difference that programmers make to our everyday lives.

That's certainly the case for the people who make our DAM solution, Chorus, which is relied upon by customers across the world for their marketing content production. We caught up with some of them for their take on the profession – and their advice for aspiring developers.

How many non-programmers know what programming, or coding, actually entails? Perhaps it's the relative modernity of the profession or the near-infinite variety of its uses, but misconceptions fly thick and fast. "My friends and family either think I’m some sort of super hacker or think I can fix their printer," laughs developer Tom Swaby. After we spoke to our developer team, two things stand out: it's for people who like to solve problems, and as skills go, it's surprisingly creative.

It's amazing to think how many of the modern tools and conveniences at the centre of our lives – personal and professional – are the result of someone who's used coding to solve a problem that's bugged them. In fact, this is how Third Light itself came to be almost 20 years ago – when our founder Michael Wells, a passionate photographer, used his software engineering training to create a system to manage a library of digital images that was rapidly getting out of hand.

"A career in programming is flexible and satisfying," he says, "but it's also a fantastic standalone skill for anybody who needs to innovate or improve something. Whatever you want to build, create or fix, you can get in and get it done, exactly the way you need to." "I think a lot of programming ultimately comes down to solving a series of logic puzzles," says our Development Director, Ben Holland. "Some big, some small, some easy, some hard. The enjoyment comes from the fact that these puzzles are very rarely the same."

It’s this near-infinite range of applications and possibilities that mean we benefit from a team of people hailing from such different backgrounds, with diverse ways of thinking – not all of whom came to Third Light from the single specialism one might expect. Anna did, having started coding way back at school. "It was really cool," she says. "I also went to a coding club and then when the time came to go to university I chose an engineering specialization."

Chris grew up in a technical household – his father enjoyed building early computer kits – so it all came naturally to him: "An early interest in Lego and Meccano, and the problem solving around it, evolved into learning programming, studying computing and eventually taking on a MEng degree in software engineering."

Others have come to us from less conventional backgrounds. For example, Tom originally studied animation and interactive media at university. "The course included some basic development for games and websites," he says, "but I was mainly there for the animation and modelling, 2D and 3D. After graduating, I went on to do that for a living, including Flash animations for websites, Then Flash was mostly replaced by html5 – which called for a lot more coded scripting – and that’s where I got fully into coding. It was so satisfying to get animations working and create libraries I could reuse across my work. This took me to web design and front-end development."

His teammate Nicola started in project management, via a postgraduate training scheme. While applying these skills to a software implementation project in San Francisco, "I ended up being more interested in what the programmers were doing than my own work," she says. "So while I was out there I went to a couple of workshops to explore more. I really liked it, so when the project ended and I was back in the UK, I quit my job for a three-month coding 'bootcamp' in London – and haven’t looked back!"

Our newest recruit, Kim, found her passion for coding ignited spontaneously. "I had some free time after university, and started teaching myself to code. I immediately fell in love with it. The creative aspect is very important to me, especially in the development communities where everyone shows off and discusses their creations; it's wonderful."

The puzzles and the craft

"I got into coding because I needed to solve a mystery," says Ben. "My brother and I used to copy BASIC source code into our BBC Micro, line by line from a text adventure game book and saving it to an audio cassette every so often. We spent days running the tape and seeing the game crash, then checking, correcting and double-checking mistakes. Finally we could play the game but then the worst thing happened: we couldn't complete it! Was it broken, did we make another typo? We didn't know, and so we gave up.

"Years later, I tried again –this time with the analytical skills required to scrutinise the code. I spent hours tracing through the crazy BASIC, learning new syntax and keywords as I went along – and eventually discovered a one-character error in the book which, once fixed, allowed me to complete the game. And while this was a bonus, being able to solve the problem was more important to me."

"Another powerful aspect is the sense of craft that goes into creating a piece of software," he adds. "It's a body of work that takes time, skill and experience to create." Nicola agrees: "It's very satisfying to be able to point at something and say 'I built this'. I also like the combination of logic and creativity it requires." Tom says: "The thing I enjoy most about it now – which wasn't immediately apparent to me during my formal studies – is how coding lets a creative mind flourish. Now I understand more of the whole development spectrum, I get it. If a friend or I have an idea, I'm already thinking about how I can make it happen."

Chris says he enjoys the engineering side the most: "It’s about building robust software that’s maintainable, meaning the code is understandable by other developers. I also really enjoy working with a small team with diverse experience and interests – and building something as awesome as Chorus!"

Is coding for you?

What advice would our developer colleagues give to anyone thinking about taking up coding? If you’re aiming to make it your career, says Nicola, make sure you test the waters thoroughly. "There are lots of free resources out there aimed at introducing people to coding so definitely try before you fully commit," she says. "And if you know it's for you, I'd highly recommend a good coding bootcamp. I found the focused syllabus, teaching and help with finding jobs afterwards to be enormously useful - it more than paid for itself."

If you think self-guided learning is for you, says Kim, "find a project or area you're passionate about and get to know others in the community. Go to conferences, make friends. You'll enjoy yourself more, feel more at home and open doors for yourself professionally." Chris agrees. "Have fun, take on a project that interests you and you find enjoyable. My most memorable early project was building a Point of Sale system for a tuck shop I ran as a Scout!"

Tom suggests an approach that’ll help any creative thinker: "Enjoy the process of learning and don't be worried about getting it 'correct'," he says. Anna recommends keeping your professional development flexible: "You just need to start, play with different technologies to find something you enjoy, and never stop learning," she says.

Based in Cambridge, Third Light has nearly 20 years' experience in digital asset management software. Our solutions are used by the marketing and creative teams of more than 300 organizations in fields including education, sport, not-for-profit and global business.