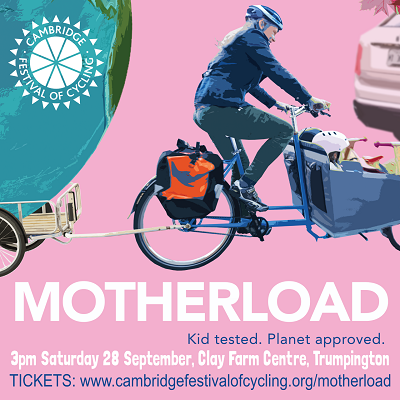 The award-winning cycling film of the year, MOTHERLOAD, is coming to Cambridge. Hosted by local charity Camcycle as part of the Cambridge Festival of Cycling, the crowdsourced documentary about the cargo bike movement will be shown at the Clay Farm Centre in Trumpington on Saturday (28 September).

Doors open at 3pm with Beanissimo offering a range of refreshments and cakes from their cargo bike café before the movie starts at 3.30pm. The screening is one of just a handful in the UK and this Saturday is the only showing planned for Cambridge.

Camcycle Executive Director, Roxanne De Beaux said "Cambridge has an amazing and growing cargo bike culture. Just a few days ago we saw over 60 cargo-carrying bikes join us in our cargo bike parade through Cambridge. This Saturday we can be inspired by others around the world who are also discovering the life-changing power of cargo bikes which can help us deal with many of the challenges our society is currently facing. Cargo bikes are a pollution-free, congestion-busting, fun and social form of transport that we should be encouraging with more, better and safer cycling infrastructure."

‘Cargo bikes’ are long-frame bicycles which carry passengers and heavy loads. They are an increasingly common sight around Cambridge, often with a box full of excitable children on the front. The documentary explores and celebrates the history and power of this fascinating type of bike. It suggests that the cargo bike could be an antidote to some of society’s most fundamental problems, such as climate change, consumerism, isolationism, and digitalisation, especially given how easily it can replace the car. Humans naturally crave social interaction and outdoor sensory experiences; it is argued that cargo bikes can give us that and more. Mum of four Stacy Bisker mentions in the film, a cargo bike can make ‘the mundane’, like going to school or picking up groceries, become ‘extraordinary’.

The film originally came about because of the life-changing impact that a cargo bike had on the life of the filmmaker, Liz Canning. After having twins, she was heartbroken about having to rely on a car for transport, because she was used to cycling everywhere and was determined never to own a car. She wanted that sense of freedom and adventure back, and she wanted her children to have it too, so she googled ‘family bike’ to see what was out there and uncovered a global movement of people replacing cars with cargo bikes, for all kinds of reasons. MOTHERLOAD explores her story and her attachment to these impressive machines, among many stories crowdsourced from around the world.

Tickets for MOTHERLOAD are available from the Cambridge Festival of Cycling website, where you can also watch the trailer and find out more about the film: cambridgefestivalofcycling.org/motherload

Join Camcycle on Saturday for a film which will make you laugh, cry and ponder the power and potential of the humble cargo bike. 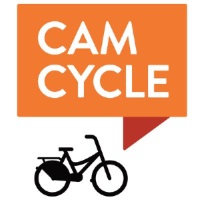 Camcycle, the Cambridge Cycling Campaign, is a charity run by volunteers. Founded in 1995, our aim is safer, better and more cycling in the Cambridge area, where about half of the local population uses a bike at least once a month.