The team from Arthur Rank Hospice was delighted to be among guests in the Great Hall at King's College last night for the Cambridge News and Media Business Excellence Awards 2017. 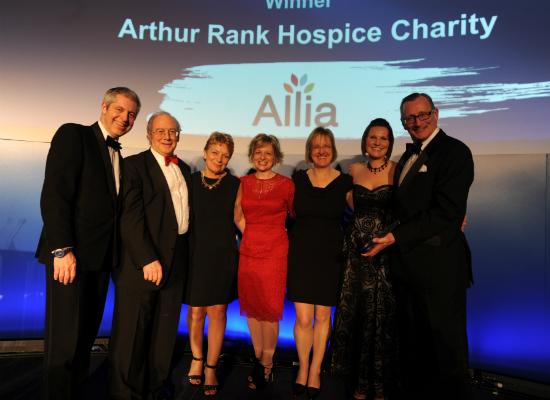 Recognising impressive achievements, Richard Duxbury, Managing Director of Cambridge News & Media said: “…what stands out now is the incredible resilience and can-do attitude of our local business community. This year’s winners represent the powerhouse that is business in Cambridge.”

Director of Fundraising and Communications, Donna Talbot, who attended the evening alongside Stuart Evans (Chair of Trustees), Lynn Morgan (CEO), Liz Webb (DCEO) and Karen Field (Finance Director) said: “The beautiful historical setting played host to a superb awards evening, celebrating the wonderful richness and diversity of Cambridge’s businesses. The food and service were exceptional and the evening was so well-structured that guests had plenty of time to relax and network with like-minded business people. We were honoured to be part of this long-standing and highly respected date in the Cambridge calendar.”

The Hospice is delighted to have won the Allia Award for Social Entrepreneurship, recognising the progress Arthur Rank Hospice Charity has made during the last six years.

The nomination within the event programme draws attention to the progress made within the last six years, stating: ‘Arthur Rank Hospice Charity has ...gone from employing less than 10 people and fundraising for an NHS hospice, to now being an independent hospice and employing circa 160 people. They have built a state of the art hospice, with no public investment which enables them to care for twice as many inpatients. They have taken themselves out of the control of the NHS to a situation where they have the scope to generate funds and deliver care in the most effective and compassionate way.’

An unexpected accolade was awarded later in proceedings to CEO Lynn Morgan as she was presented with The Biomed Realty Trust Award for Business Person of the year. In a write up on the Cambridge News website, they summarise: “Since joining the Charity as CEO in 2010, she has overseen the building of a new hospice, which is now up and running at Shelford Bottom, as well as transitioning Arthur Rank Hospice to an independent model.”

The Charity is extremely proud of her achievements, feeling such recognition is extremely well deserved. Lynn’s dedication, hard work and tenacity has been a driving force propelling the Hospice into a new chapter and preparing it for the future. Lynn says: “I was overwhelmed and very surprised to receive this award. We have been supported every step of the way by our community and a wealth of local businesses and organisations: it has certainly been a busy and rewarding year.”

Congratulations to all the winners on the evening including Amino, Sir Michael Marshall, Owlstone Medical, CamYoga, Forward Composites , Bidwells and Harriet Kelsall (who incidentally also featured on the Charity's Team Arthur video last year) and thanks to the evening's sponsors. Read about all the winners of the  Cambridge News and Media Business Excellence Awards 2017

Image courtesy of the Cambridge News