Festival offers a classical music experience for the playlist generation 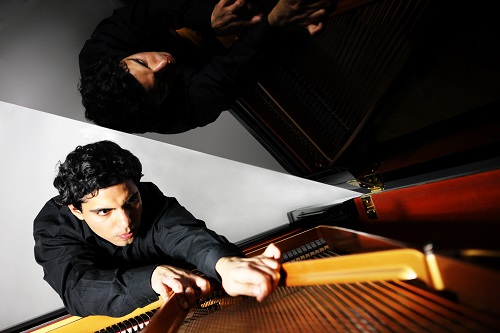 Classical music lovers are often stereotyped as older people who already know their Brahms from their Beethoven. But this year’s Cambridge Music Festival aims to reach a very different type of listener: a growing legion of fans who are getting their classical fix in bite-sized morsels on streaming platforms, and may never have set foot in a concert hall at all – until now.

In fact, the 2019 Festival, which kicks off 6 November, is probably wider-ranging than ever before. As always, it will give a platform to world-famous artists, like violinist Joshua Bell. But audiences can also expect more of the unexpected: astonishing musicians who seem to defy the humanly possible; concerts that stray from the conventionally classical into jazz, folk and electronica; and an overall commitment to “loosening up” the live experience.

“The amount of interest in classical music is huge, but these days most listeners are streaming it digitally and mixing it up with other styles in their own playlists,” Festival Director, Justin Lee, points out. “They don’t care about categories, they just like the sound. We’re trying to evolve the Festival to fit with that approach, so that people can just try things out. Our attitude is very much that no previous experience is necessary!”

Taken together, the 2019 Cambridge Music Festival programme is almost a live playlist in its own right; a smorgasbord of classical experiences for audiences who are used to mixing and matching sounds in the Spotify age. “Often we have newcomers at our events who have been brought along by a friend, and end up saying, ‘Wow, that’s amazing, I hadn’t realised what it would be like,’” Justin reflects. “To reach those people more often, we have to offer them more than just music. We’re also saying, come and try this for the experience.”

Part of the buzz will be around what he calls the Festival’s “high-wire acts”, performers capable of putting audiences on the edge of their seats because they can do things that almost nobody else on the planet can. Joshua Bell, for example, one of the world’s greatest living violinists, will be playing Mendelssohn’s violin concerto with The Academy of St Martin in the Fields and is renowned for passionate, next-level, electrifying performances that are simply unlike anything audiences can hear anywhere else.

Australian saxophonist, Amy Dickson, meanwhile promises to take audiences’ breath away by literally controlling her own: her stunning renditions of Philip Glass’ violin music are achieved via ‘circular breathing’, in which she maintains constant exhalation and manages to recreate the smoothness of a violin bow using a wind instrument. 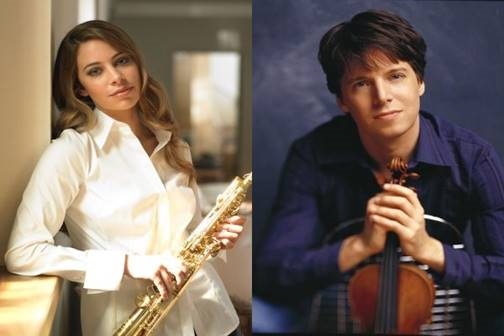 Saxophonist Amy Dickson (left) and violinist Joshua Bell are two of the leading classical stars appearing at this year’s Festival.

The programme also features plenty of artists who blur the boundaries between different media and styles: Zubin Kanga (pictured top) is a leading experimental pianist who uses sensors on his hands to manipulate electronic sounds live during the performance, while Trio Manouche are joyful exponents of 1930s-style Parisian swing. I Fagiolini, a British vocal ensemble known for their theatrical performances, will present music from the last 500 years that has associations with the works of Leonardo da Vinci, while simultaneously inviting art-lovers to lose themselves in large-scale projections of his paintings.

Just as significant, however, is the Festival’s shift towards a more relaxed style. At many of this year’s events, there will be opportunities to hear artists talking about the music they love live on stage, or even to chat with them over a drink after the performance. Some events also break with the traditional concert formula by introducing other elements, such as art and film. This, Justin says, represents a gradual “loosening up” of the stiff formality that can sometimes characterise classical concerts.

Plenty, though, will still appeal to more traditional classical fans. The Choir of King’s College and The Academy of Ancient Music, for example, will be performing Handel’s Coronation Anthems, including the much-loved Zadok The Priest, at King’s College Chapel. Pianist Steven Osborne, meanwhile, will be giving what promises to be a tour-de-force, two-hour rendition of Olivier Messiaen’s Vingt Regards – less traditional, perhaps, but a completely different, and deeply immersive experience.

And in some cases, Justin believes, it is just as important not to meddle with live classical music’s tried and tested formula as it is to push boundaries elsewhere. “In the end, the draw of some of these events is simply that audiences will be in an amazing building, hearing a world-class choir or orchestra making magnificent music,” he says. “There should always a place for that in the programme as well. It’s still an essential part of the playlist.”

The Cambridge Music Festival runs from 6-14 November at venues across Cambridge. Tickets go on sale in early September. For full details, visit: http://www.cambridgemusicfestival.co.uk/

Cambridge Music Festival (CMF) is held each year in November. The programme focuses on Music, Education and Technology -- three areas for which Cambridge is renowned worldwide. World-class artists feature in orchestral, choral and chamber music concerts, alongside a programme of education and community events, and outdoor sound/light projections.