Marshall Centre was joined by former professional racer and Formula One sponsorship legend, Brian Sims, for an inspirational HiveMind. 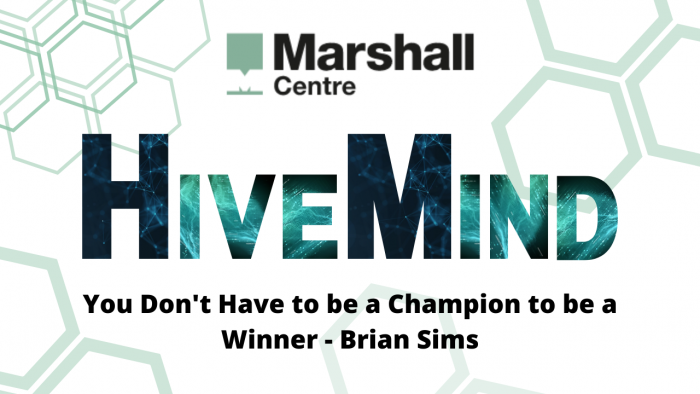 Marshall Centre had the honour of sharing its HiveMind platform with one of motorsport’s most successful and experienced sales exponents, Brian Sims. He spoke about his impressive career driven by his ability to identify and act on opportunities. Brian credits the professional selling skills he learned at Xerox for his success in the highly competitive commercial world of Formula One.

Brian left school in 1964 with five GCE O-levels. He moved from London to Southampton and started his career fitting wheels on wheelbarrows for a small builder’s merchant outside in freezing cold temperatures. Meanwhile, Brian dreamed of a career in motorsport, but it was an expensive sport to enter and seemed to be exclusively geared towards young people from wealthy backgrounds.

Brian was offered a job at Xerox and was sent to their training centre to learn the professional selling skills that he used throughout his career. Brian used the money he saved from working at Xerox to start racing in Formula Ford and he managed to secure a sponsorship deal from a new night club by pulling off a stunt that could have easily backfired. However, Brian always did his research and never went to a meeting unprepared and that is why his powers of persuasion we so successful.

Brian shared his career highlights including securing multi-million-pound deals with Gillete, FedEx and Marconi, acquiring an excess of £100 million in sponsorship deals for motorsport up to and including Formula One, founding the Motorsport Industry Association and working with TV legend, John Cleese. His expertise has been welcomed by universities and prestigious World Academy of Sport, passing on those skills to senior executives in sports associations and students, such as World Rugby, the International Cricket Council, and the International Paralympics.

He took advantage of every opportunity throughout his 45-year career and said that change is a constant and with change comes opportunities. Over the past 16 months we have faced a lot of change, but Brian believes that those who can adapt will grasp their own opportunities.

A huge thank you to Brian for taking part in HiveMind and inspiring everyone to take advantage of every opportunity that is presented to them.

You Don’t Have to be a Champion to be a Winner is the title of Brian’s latest book but it is also a powerful statement to live by. You do not always have to come first or to be the best to be a winner. Brian shares some of the opportunities that helped shape his career along with some facinating stories. If you want an entertaining and inspirational read, his book will keep you hooked from the first page.