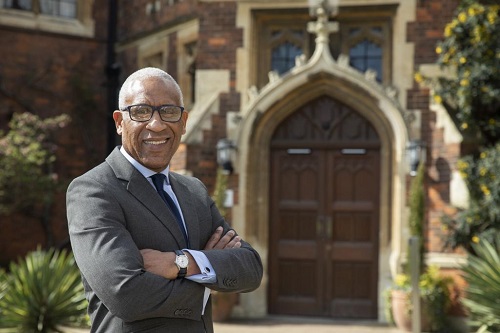 Homerton College, University of Cambridge, is delighted to announce the election of Lord Woolley of Woodford as the next Principal of the College. Lord Woolley will succeed Professor Geoffrey Ward on 1st October 2021.

Simon Woolley is the Founding Director of Operation Black Vote, the internationally renowned campaigning NGO which he launched in 1996. OBV works with ethnic minorities in the UK to increase understanding of civic society, participation in Parliament and public life, and to promote equality and human rights. Formerly an Equality and Human Rights Commissioner, in 2018 Lord Woolley was appointed by Prime Minister Theresa May to create and lead the UK Government’s pioneering Race Disparity Unit. The Unit collects, analyses and publishes data on how crime, education and health are affected by ethnicity.

Fostered and then adopted as a small child, Lord Woolley grew up on a council estate in Leicester, and left school without A-levels. He later returned to formal study via an access course and gained a BA in Spanish and English Literature at Middlesex University and an MA in Hispanic Studies at Queen Mary University of London. He is passionate about educational access and the importance of recognising and supporting marginalised potential.

Lord Woolley has a track record of addressing representational imbalances, transforming institutions, and nurturing individuals. His cross-party and cross-sector work with Operation Black Vote has seen the number of MPs from black and minority ethnic backgrounds rise from 4 to 65 over the past two decades. In collaboration with Magdalen College, Oxford, he has been instrumental in the development of Pathway to Success, a programme designed to equip future BME leaders with the tools and knowledge required for senior leadership.

Repeatedly recognised in the Black Powerlist, Lord Woolley is dedicated to promoting opportunity for underrepresented communities and individuals, and to building consensus across political and community lines.

Simon Woolley was knighted in the Queen’s Birthday Honours in June 2019 and was created a life peer in December of the same year. He sits as a crossbencher in the House of Lords. He was awarded an honorary doctorate by the University of Westminster in 2012. He is a regular contributor to newspapers nationally and internationally on topics relating to equality, diversity and social justice.

Lord Woolley said: “What a truly great honour to be appointed the next Principal of Homerton College. Its history, from its origins in the East end of London, and its values of inclusion, dynamism and integrity, along with its vision to be a beacon of hope and academic excellence, make this a must-have role. It’s a great privilege to follow in the footsteps of Professor Geoff Ward, and I hope I can balance the College’s friendliness and warmth with ambition, as he has done so well. I’m excited to get to know the staff and students in Homerton and the wider University of Cambridge, and I’m excited for the next part of Homerton’s journey.”

Professor Geoffrey Ward said: “I welcome Simon Woolley very warmly, and congratulate him on election to this wonderful job. Throughout my time as Principal, I have taken great pleasure from the Homerton community, particularly our magnificent students, and I am sure he will get a warm welcome from them too.  One of the glories of Homerton is that it is never the same today as it was yesterday, and I wish Simon every success in leading the College to ever greater heights.”

Dr Louise Joy, Vice-Principal of Homerton and leader of the search for the new Principal, said:  “We could not be more thrilled to have elected Simon Woolley as our next Principal. Simon’s own inspiring story and his commitment to promoting social justice and nurturing talent across the social spectrum resonates with Homerton’s core values. Simon will be a standard-bearer for the aims of the College. He has the vision, purposefulness and humility to bring together students, staff and Fellows over our shared aspirations to help young people from all backgrounds feel at home at Homerton, and to provide them not only with a world-class education but also with the confidence and skills that they need to thrive and to go on to make a difference in their chosen fields.”

Joseph Saxby, President of the Homerton Union of Students, said:  "I am delighted that Simon will take the reins at Homerton. He has the passion and the experience to keep pushing Homerton in the pursuit of social justice and genuine diversity, and I’m excited to see the waves he will make and the changes that will come. I am also sure Simon is keen to be involved in the breadth of student experience at Homerton. He will challenge students to achieve, support students throughout their time at College and celebrate the non-academic passions that make Homerton students special. I personally cannot wait for Simon to be welcomed into the Homerton family."