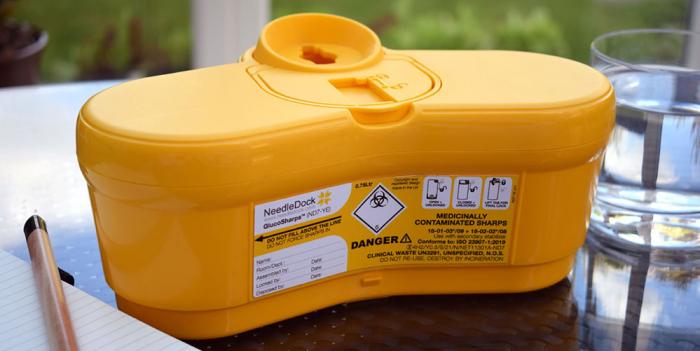 NeedleDock was developed to address the significant number of accidents that are caused as a result of needle disposal. These often unreported incidents present substantial risks to healthcare workers. With CAD designs finished and intellectual property secured,  Prototype Projects was approached to 3D print and dye NeedleDock.

Anyone working in healthcare is at risk of a needlestick injury. Research shows that needles account for hundreds of thousands of accidents each year, exposing the individual to potentially life-threatening blood borne diseases.

NeedleDock was developed to address the significant number of accidents that are caused as a result of needle disposal. These, often unreported, incidents present substantial health risks.

After extensive discussions with a broad range of healthcare professionals, the necessity for NeedleDock became apparent. Existing products were not meeting the needs of staff and simultaneously presenting them with an unnecessary and preventable risk in their workplace.

With involvement from customer feedback groups, hospital management and stakeholders, the NeedleDock team created an innovative and, most importantly, safe product, made for healthcare professionals.

The original concept was developed by Ady Nunn from West Suffolk Hospital in Bury St. Edmunds. It was quickly taken up and developed further by NeedleDock founders and R&D specialists, Chris Stanton and Paul Brown.
The idea is that the needle stick is inserted into the product – called NeedleDock – and is safely separated from the syringe. Unlike traditional sharps bins, by safely removing the needle, the risk of an injury is greatly reduced for healthcare professionals, ancillary staff and waste management operators.

This first product was launched at the end of 2020 and is sold internationally via a network of distributors to healthcare providers.

NeedleDock products have developed from this initial product to further innovations, targeting the needs of other needle users. Several new products will come on stream in late 2021/early 2022.

With the CAD designs finished and intellectual property secured, Chris acted upon various recommendations when looking for a prototyping partner and soon approached Prototype Projects.

"It was an easy process with Prototype Projects. I met with Gary who explained the different technologies available and showed me a range of samples to demonstrate their ability to dye parts too."

Chris wanted the prototype to closely resemble the finished product, and to be able to test the functionality of interchangeable parts.

The NeedleDock was 3D printed using SLA and SLS. The container was printed in clear SLA material on Prototype Projects’ ProJet 6000 machine. The lid and insert were printed using SLS; the lid was dyed yellow, while the insert was dyed purple.

"The prototype looks like an injection moulded part and still sits on the shelf in my office."

The NeedleDock prototype was printed and hand-finished in time for the Future Healthcare exhibition at Olympia London. The team received a positive reception and now sell the product via Amazon and international distributors.

"I was really pleased with the NeedleDock prototype produced by Prototype Projects. They have helped us develop a sustainable, needlestick injury solution that is not only good for staff safety and wellbeing but helps to reduce waste and cost in healthcare."

In their next project, Chris and Paul aim to help diabetics both at home and on the go, with the launch of GlucoSharps. Specifically designed for diabetic users for the safe disposal of insulin pen needles and Continuous Glucose Monitors (CGM’s), GlucoSharps was launched in October 2021.