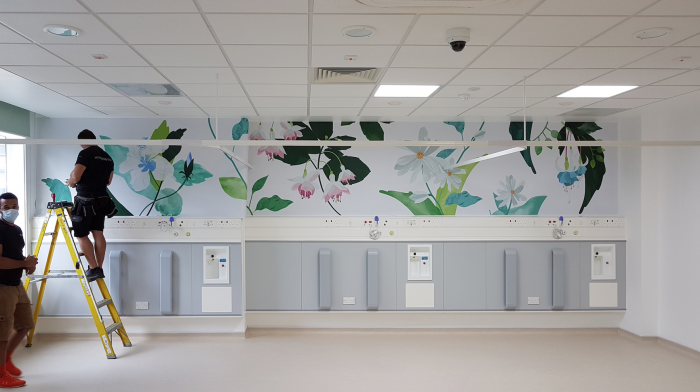 As Design Week features a new book from Phaidon charting the history of flowers as a medium for creativity, Sable&Hawkes has just completed a new environment design project for the NHS with a flower inspired install at the Charing Cross Hospital Dialysis Unit, part of Imperial College Healthcare NHS Trust.

Working in tandem with illlustrator Rose Darling and The Imperial Health Charity, Sable&Hawkes was commissioned to design, commission, manage and install a new environment for the Dialysis unit at Charing Cross hospital, inpsired by the hospitals most famous local landmark, the Vineyard Nursery.

Situated on the Hammersmith Road where the Olympia Exhibition Centre now stands, the nursery became a prominent and well known local landmark and following an internal creative discovery stage was chosen by staff and the team to be the focal point for the creative solution.

The Vineyard Nursery - which was set up by James Lee and Lewis Kennedy around 1760 – has been credited with introducing many plants into this country, including the Hibiscus, Dahlia and Fuschia. The nursery was also responsible for raising the first seeds brought back from Botany Bay by Captain Cook.

Noted illustrator Rose Darling was commissioned to create individul elements based on the vineyard most famous flowers that we then used to fashion the floral montages. Installation was also managed and completed by Sable&Hawkes.

Sable&Hawkes is a design communication company.