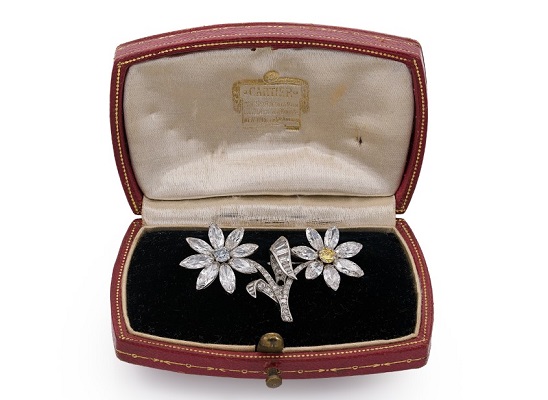 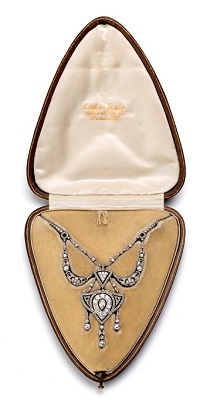 This was quickly followed by a Belle Époque diamond necklet (right), which sold for £11,000, well above its pre-sale estimate of £3,000 - £5,000 to another UK-based trade buyer. Similarly, an Art Deco sapphire and diamond ring saw much pre-sale attention, eventually selling for £9,500 against an estimate of £800 - £1,200 to a UK trade purchaser following competitive bidding between both dealers and private buyers.

Also much in demand were the objets, including two early 20th century mesh style dance purses, belonging to the Right Honourable Countess Spencer (DCVO, OBE, 1897 – 1972), Princess Diana’s paternal grandmother, and a collection of four early to mid-20th century nécessaires, one of which was gifted to Lady Anne Spencer, Countess Spencer’s daughter and the aunt of the late Diana, Princess of Wales. Both of these lots were purchased by the same UK-based private collector for a total of £2,320.

Items with war provenance also proved popular and among the silver, a 20th century silver presentation salver which was gifted to Air Vice Marshal James Edgar ‘Johnnie’ Johnson, the highest scoring Western Allied pilot against the German Luftwaffe and the Royal Air Force’s officially recognised top-scoring fighter pilot of WW2, sold for £800.  Similarly, a WW2 campaign medal group with two rare ‘Caterpillar Club’ pins – which belonged to Flying Officer Edward Harold Ruston RAF and the group sold for well above estimate at £1,600 to a private collector (estimate £600 - £800.)  A WW1 medal trio with a Distinguished Conduct Medal and a Croix de Guerre avec Palme, which was awarded to 516 Lieutenant Frederick Joseph Evans of the East Surrey Regiment, sold for £1,800, against an estimate of £700 - £900 to a UK-based private collector.

Steven Collins, Jewellery, Silver & Watches Specialist at Cheffins says: “The results of this sale go to show the shortage of fine vintage jewellery in the current market. This meant that trade buyers were out in force, competing against private collectors for the best items on offer, with strong demand for the best quality antique pieces. We saw some strong bidding across the board, achieving some fantastic prices, many of which were well above their top estimates. The saleroom was full of buyers, which made for a lively atmosphere and spirited bidding as those in the room competed with those online or on the telephones. We are now working on the catalogue for the next sale in December, and have some exciting items already consigned.”