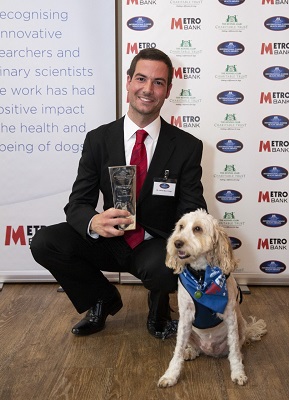 Adrian Baez-Ortega, 28, from Spain, has won the Postgraduate Student Inspiration Award as part of one of the largest and most prestigious veterinary awards in the world, the International Canine Health Awards.

Adrian, who is currently conducting his PhD in biological sciences at the University of Cambridge, has been awarded a prize of £10,000 to help further his research into the evolution of canine transmissible venereal tumours (CTVT), a condition that has infected domestic dogs for the past 8,000 years and is found in around 100 countries worldwide.

As part of his research, Adrian has developed a computational approach which identifies the exact genes that are active in biopsy samples taken from tumours, from more than 40 countries. This is likely to have fundamental importance in developing new methods for treating this disease.

Following completion of his doctorate, Adrian plans to continue this research, exploring the ways that CTVT interacts with each tumour’s host dog and how it avoids being destroyed by the canine immune system.

The awards, which are run by the Kennel Club Charitable Trust and underwritten by a major gift from Vernon and Shirley Hill of Metro Bank, highlight those individuals who go one step further to promote the health and wellbeing of dogs through their work in the world of veterinary science.

This year’s awards were presented to winners by Professor Steve Dean, chairman of trustees of the Kennel Club Charitable Trust and Caroline Kisko, Kennel Club Secretary on Thursday 30th May at the De Vere Beaumont Estate, Windsor on behalf of the Vernon and Shirley Hill Foundation.

After taking his undergraduate and master’s degrees in computer science at the University of La Laguna, Tenerife, Spain, Adrian undertook a summer research internship with his current supervisor, Elizabeth Murchison, which is when his interest in CTVT first came to light. This fascination became the focus of his PhD.

Funding from the International Canine Health Awards will allow Adrian to extend his PhD research, and enable him to gain more knowledge about which genes allow CTVT to systemically escape the immune system of infected dogs, in the hope that better understanding might lead to better treatment of this disease.

After winning the award, Adrian commented: “I feel immensely honoured to have been selected, especially as my background is not as biology-centred as that of other applicants.

“Even though I am really glad the award funds will allow me to keep working on CTVT and making contributions to the field after my PhD, I feel that the award itself is a much greater prize than the money.”

Nominations for the awards were judged by a panel of influential representatives from the veterinary profession and the world of scientific research. This year’s judges for the Postgraduate and Undergraduate Awards were Dr Andrew Higgins, Honorary Editor-in-Chief at the Veterinary Journal; Professor John Innes, UK Referral Director at CVS and Professor David Argyle, Dean of Veterinary Medicine and Head of School, Royal (Dick) School of Veterinary Sciences.

Professor Steve Dean, chairman of trustees of the Kennel Club Charitable Trust, which runs the International Canine Health Awards, said: “Congratulations to Adrian for winning this award for his work into CTVT. His current research is very impressive, even more so considering he hasn’t trained as a biologist or veterinarian, and could contribute significantly towards improving the health of many dogs. Adrian is a very deserving winner and we look forward to seeing how his research progresses in the future.”

Vernon Hill, founder and chairman of Metro Bank, and Shirley Hill, whose foundation underwrites the awards said: “Very well done to Adrian – his work is so important and is an inspiration to all young researchers out there who want to protect the lives of man’s best friend. We want to wish him the best of luck with his research and all of his future endeavours.”