Cambridge registered the highest fall (-30%) in cash buyers of all UK Cities between April 2016 and April 2019, according to the latest Zoopla UK Cities House Price Index. What’s more, cash buyers have fallen in 90% of UK Cities since 2016.

The number of cash buyers has declined most significantly in cities with the highest capital values and lowest yields, mainly encompassing London and Southern cities. The fall in cash buyers in these cities ranges from -10% in Southampton to -30% in Cambridge since 2016.

Cash buyers have fallen in 90% of UK Cities since 2016 according to the August Zoopla UK Cities House Price Index (See Figure 1). In Zoopla’s view the decline in cash buyers is largely a result of the 2016 stamp tax changes impacting investors and second home-owners.

In contrast, demand from mortgaged home buyers is continuing to grow amidst a backdrop of weaker house price growth, which together are delivering mixed signals across the UK’s housing market. Zoopla believes this disparity is down to the changing mix of buyers since 2016 and the variable status of each city’s house price recovery.

House price growth has slowed to more sustainable levels with prices 1.9% higher than a year ago (see Table 1).  Leicester is the fastest growing city (+4.8%) followed by Liverpool (+4.6%).

This is the first time since 2012 that the fastest growth city has a rate of price inflation below 5%. Meanwhile, house prices continue to fall in Oxford (-0.4%) and Aberdeen (-4%).

New analysis in this month’s report finds that there has been a major shift in the mix of buyers purchasing homes across UK cities. Today, 1 in 4 sales are to cash buyers, down from 29% in 2013.  Cash buyers are a mix of home-owners and investors. Zoopla analysis shows the number of cash buyers has declined most significantly in cities with the highest capital values and lowest yields.

In contrast, cities where the recovery in prices has been weakest, or indeed where prices have fallen, have registered an increase in cash buyers in recent years – Liverpool (10%) and Aberdeen (14%) (see Figure 1).

While the headline rate of growth has slowed, the performance of house prices since the last market peak in 2007 has varied by over 90%. Despite recent price falls, London house prices are 56% higher than 2007, while those in Belfast are -40% lower (see Figure 2).

This reflects the relative strength of local economies and the demand for, and affordability of, housing in each city. In addition to Belfast, house prices today are still below 2007 levels in Newcastle (-1%), and Aberdeen (-8%).

Three years into the repricing process in London and it is becoming clear that the fall in house prices and sales has bottomed out. House prices grew in London by 0.2% in the twelve months to August 2019.

Analysis of Zoopla listings data shows that there has been a small increase in activity as prices start to adjust to what buyers are prepared – or able – to spend. As a result, the number of listings (9.7%) registering price reductions in the London market has hit its lowest level for three years. Zoopla does not expect house price growth to increase, but builders and agents in London will welcome any improvement in market activity.

Richard Donnell, Research and Insight Director at Zoopla, comments: “The housing market is throwing off mixed signals as the headline rate of price growth slows yet demand from home-owners using a mortgage continues to increase. This is at a time when Brexit is dominating the headlines again and further complicating the outlook.

“Despite increased uncertainty, demand from mortgaged home-owners appears resilient, with demand supported by low mortgage rates, high levels of employment, and households who want a home.

“A change in the mix of buyers has impacted the demand for housing across cities since 2016. The reduction in cash buyers has been marked in southern cities and we believe this is down to a decline in investment-buying across high value cities. This has compounded the slowdown in price rises, which we see as a return to a more sustainable pace of price growth rather than an impending re-correction.

“The London market continues to see greater realism in pricing and there are signs of a modest increase in market activity. This isn’t a precursor to price rises, but we do expect sales volumes to start rising once again.” 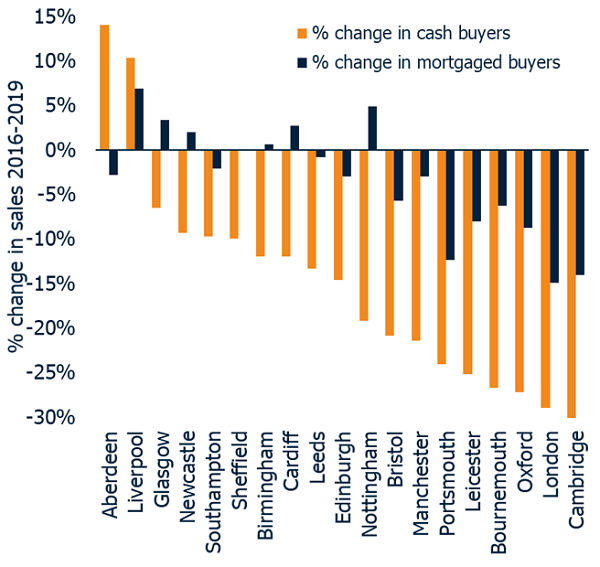 Source: Zoopla analysis of ONS sales data – 2019 is data for the 12 months to April 2019. N.B the dataset for Belfast was unavailable 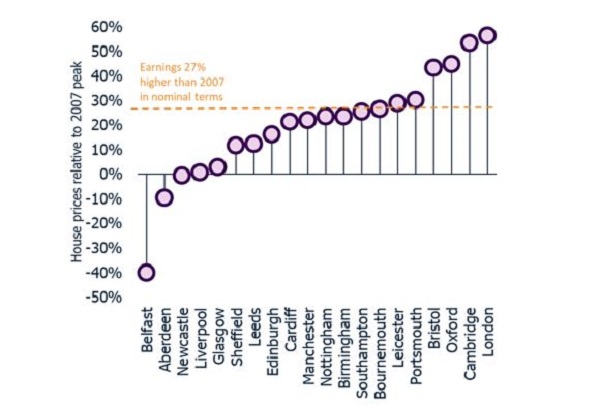 About Zoopla’s UK Cities House Price Index
Zoopla’s House Price Indices are based on the largest underlying data sample of any UK house price index. The 20 cities covered by the index contain 35% of the UK housing stock by volume and 43% of capital value. Our index FAQ’s have all the information about our indices and how they are run. Data for the index is powered by Hometrack, a part of Zoopla. Hometrack is a leading provider of automated property valuations and statistical property market insights in the UK to over 400 partners including mortgage lenders, developers, investors, government agencies, housing associations and others.