Customer Premises Equipment (CPE) has been ripe for innovation for years.

Hundreds of millions of CPE devices such as network switches, Wi-Fi routers, and firewall appliances have been deployed at enterprise customers serviced by telco providers. While CPEs can rival servers in technical sophistication or performance requirements, these so-called black boxes differ from application servers or PCs when it comes to flexibility. Except for high-end models, most CPEs can only perform a select number of fixed functions.

In more recent times, the rise of software defined-everything, paired with virtualization and container technologies, has accelerated interest in a universal CPE (uCPE) that can be provisioned or reprogrammed. When used in tandem with network functions virtualization (NFV), uCPE reduces the number of devices needed to provision network services on a customer's footprint and reduces costs associated with installation, maintenance and support, offering the ability for customers to upgrade services without replacing hardware.

Arm has been driving innovation at the core of uCPEs to help lower the cost, improve energy efficiency and accelerate the performance of networking equipment, edge servers and other devices.  Through platform initiatives such as ServerReady and Project Cassini, an ecosystem of Arm-based devices is ready to reshape the market. Arm-based uCPEs running cloud native software stacks can be scaled from four to 32 cores and provide enterprise grade connectivity services to a broad set of markets.

In an effort to prove these benefits can be achieved, Arm, NXP© Semiconductors, Telco Systems, and Vodafone have developed a proof of concept uCPE that supports multiple enterprise services such as SD-WAN, routing and firewall. The uCPE effectively combines the rock-solid reliability of CPEs with the ability to easily add or subtract services. Several applications were launched and tested on a hybrid virtualization and container platform from Telco Systems NFVTime. These solutions were tested on multiple Arm Neoverse-based processors, designed by NXP, demonstrating the ability to support real use cases with ever changing demands.

The uCPE was tested by Vodafone Group labs in the UK for both small/medium business and enterprise use-cases. This was the first time the group had shown a fully orchestrated mix of container and virtual machine-based network functions running on the same platform. The Vodafone team successfully deployed and managed VNF and CNF applications on a 35W (typical) system based on an efficient 4-core Arm Cortex-A72 processor. Following this success, on an 8-core Arm processor, they 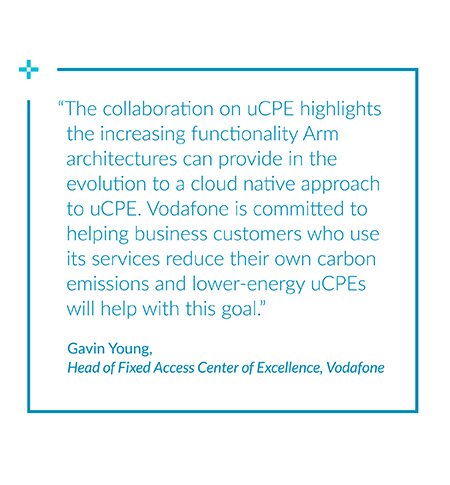 NXP Layerscape™ processors provide a unique advantage by including hardware acceleration blocks with the right balance of Arm core counts for this market, creating a substantial reduction in energy consumption and emissions.

In talks with Gavin Young, Head of Fixed Access Center of Excellence at Vodafone, he made it clear that this project is a major milestone toward a new way of deploying digital services.

Network operators can benefit from a solution that can scale from the smallest office or retail location all the way up to large national or regional offices while meeting stringent cost and performance objectives with a seamless, fully automated software. The flexibility of the platform helps support remote deployment and management of services across multiple verticals. There is possibility to disrupt costs associated with network services through the Arm ecosystem that offers multi-vendor solutions. We can effectively scale down the cost of deploying services while increasing system performance to levels not seen with other platforms.

Thanks to the Arm technology inside NXP’s Layerscape processors, we expect energy consumption, emissions, and operating costs to decline. Additionally, the Telco Systems platform complement’s the hardware efficiency by enabling a tightly integrated virtualization platform supporting a mix of containerized applications and NFV. Arm has already shown it can deliver the performance needed for uCPE in a new class of power efficiency not seen before, with Arm-based uCPE solutions operating at 35W typical power consumption or about one-third the power of alternative x86 uCPE systems. With a growing number of software partners, and early adopters such as Vodafone, Arm is showing the world it can deliver a flexible uCPE solution.