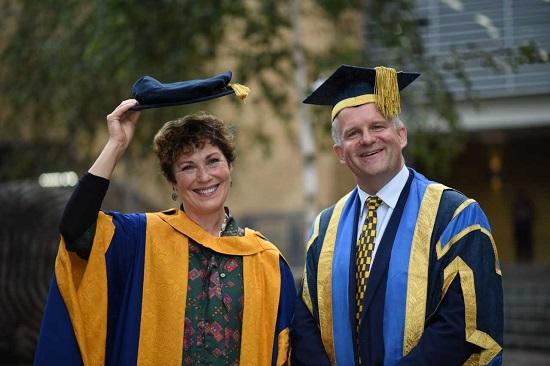 Rebecca Stott is a novelist, academic, broadcaster, historian, and currently Professor of English and Creative Writing at the University of East Anglia.

Born in Cambridge, Rebecca spent her early childhood in 1960’s Brighton, growing up in a family that was part of a radical Christian sect called the Exclusive Brethren. Although Rebecca’s father would ultimately liberate his family from the Brethren in 1972, the experience would colour the rest of her life, and lead to her writing the Costa Award-winning memoir, In the Days of Rain.

In the early 1990’s Rebecca taught at both York and Leeds Universities, before coming to teach at Anglia Ruskin – where she would spend the next 13 years, five of them as Head of Department.

During her time here, Rebecca focussed on high-quality teaching and research, and championed the establishment of Creative Writing as an exciting and rewarding subject of study. Her legacy is evident in Anglia Ruskin’s very popular Creative Writing post-graduate courses and research programmes.

Rebecca is a member of that highly select band of writers who have been able to successfully bridge the gap between academia and fiction. Her first novel, Ghostwalk – set in 17th century Cambridge - was shortlisted for the Jelf Group First Novel Award and the prestigious Society of Authors First Novel Award.  Her second novel, The Coral Thief, set in post-Napoleonic Paris, has been translated into 12 languages and was serialised on Radio Four’s Book at Bedtime.

Professor Martin said: “Our University has enjoyed a long and proud relationship with Professor Stott, and even after heading off to pastures new, she continued to help with supervisions, and has taken part in discussions hosted by the Anglia Ruskin Literary Society.

“Professor Stott is a true person of letters, and will be an inspirational role model for our students, particularly those studying Creative Writing.”