A team effort to quickly detect and treat a virus which is the leading cause of hearing loss in babies has been launched in Cambridge following a team effort by NHS experts. 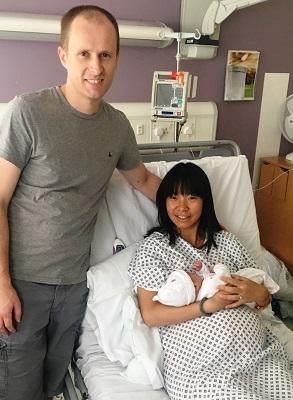 Community paediatricians, neonatologist, audiologists and virologists, who are studying latest national and international research into cytomegalovirus (CMV), pooled expertise and resources to introduce a test to identify infants who might be infected.

The team was drawn from Cambridgeshire Community Services NHS Trust and Cambridge University Hospitals NHS Foundation Trust, which worked in collaboration with Peterborough, Southend, Basildon and Norfolk and Norwich hospitals.

CMV is a common virus that can infect people of all ages. Some can have symptoms of a common cold and some can have almost no signs or symptoms. CMV is related to the herpes virus that causes cold sores and similar to chickenpox which stays in the body forever.

What is not widely known, however, is that congenital CMV can pose a risk to unborn babies if a pregnant woman catches it for the first time - accounting for up to 20 per cent of permanent hearing loss in young children.

At CUH  the test, which will be applied to all well babies who have concerns raised on their newborn hearing tests, is being carried out by members of the nine-strong Rosie maternity hospital’s Newborn Hearing Screening Programme (NSHP) who were instrumental in implementing the initial pathway.

The new pathway involves taking a simple swab of saliva from the inside of a baby’s mouth and taking it to the hospital’s nearby laboratory block, staffed by virology experts from Public Health England.

The DNA is extracted using high-tech equipment and if CMV is detected babies are brought in for a paediatric medical examination and if appropriate they are then given urgent anti-viral treatment to slow or prevent further deterioration.

Dr Tamsin Brown, community paediatrician, Cambridgeshire Community Services NHS Trust, said:  “Congenital CMV is one of the leading causes of hearing loss in children and can sometimes cause additional complications such as learning difficulties.

“When national research identified hearing loss caused by the CMV virus could potentially be treated within one month of birth, a study day was organised and clinicians were invited from across the East of England. The response from clinicians was overwhelming with many from around the region forming a working group to see if joint working could improve current guidelines and improve outcomes for children.

“It took many dedicated clinicians across the region to get this off the ground and is an example of how the NHS is run by such incredibly dedicated staff.”

CUH NSHP local coordinator, Vicki Banks, said: “As soon as the research had been explained we set about introducing a simple test which would enable us to detect and treat more quickly babies with CMV.

“Although it involves more work, everyone was happy to help since early detection and treatment it is really good news for our babies, and their parents. It means more children will avoid the devastating impact of hearing loss caused by CMV and community paediatricians like Tamsin are less likely to see children with hearing loss conditions caused by it.”

Dr Tim Wreghitt is the honorary virology consultant overseeing DNA extraction in the Addenbrooke’s labs. He has studied CMV for 42 years and won an OBE for his research into it and its effects on patients, particularly those undergoing transplants.

He said: “The beauty of this latest work is that it is another successful collaboration between different parts of the health service. The key benefit is that it compresses the time it takes to diagnose and treat a baby with CMV.”

Image: Three-day-old Martha Timoney whose parents, Stephen and Chloe, were delighted to learn that her hearing was normal following the test.