More than 170 people, from 18 of Cambridge’s most vibrant organisations, took part in The Stockmarket Challenge sponsored by Rathbones Cambridge, this week (20 September). 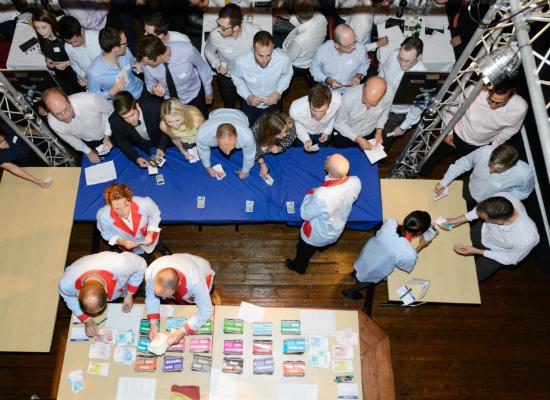 Final figures are yet to be confirmed but it is hoped that, driven by the high odds at stake on the virtual trading floor, over £20,000 will have been raised for Arthur Rank Hospice Charity’s £10.5 million state-of-the-art building at Shelford Bottom: due to become the Hospice’s new home in mid-November.

Competition was fierce within Cambridge Union’s Debating Chamber where - after a friendly drinks reception – companies closed rank in a high pressure and hard-fought race to become most profitable trader. Each of the 18 teams started with a notional figure of £15,000 and were instructed to maximize their portfolio value through trading stocks and shares and the euro, whilst being bombarded by breaking news from financial papers, radio interviews and TV reports, which added an urgent and unpredictable dynamic to the virtual trading week.

Peter Brett Associates, who have provided structural and civil engineering and transportation advice for the new hospice, were crowned the winning team with a grand total of £196,200. The development and infrastructure consultants swiped The Rathbones’ Trophy from defending champions Santander, who had to be content with a third place this year, behind Deloitte in second position who managed to achieved assets of £158,000 as the bell rang for the close of the evening’s trading.

New to the competition this year was the Arthur Rank Hospice Charity team, which included members of the senior team and new hospice’s Capital Executive Committee together with their guests. They took to the trading floor alongside Santander, HSBC, Ashtons Legal, Thomson Webb and Corfield, Bailey Fisher, Eversheds, Tees Law, Deloitte, Carter Jonas, RSM, Peter Brett Associates, Bidwells LLP, BKL Tax, Price Bailey, Mills and Reeve, and Strutt & Parker as well as sponsors Rathbones. Louise Hudson, Investment Director at Rathbone Investment Management Ltd commented: “Despite the knowledge and experience from competing last year, this game doesn’t get any easier but it was certainly extremely good fun – I’m glad to say that Rathbones’ reputation as long term investors remains intact given that the game is based on one week of stock market trading…”

The stunning auction affably hosted by Bill King of Cheffins generated an impressive £8,200 including a bid of £2,600 for the fabulous prize of an Afternoon Tea and a three course dinner with wine and chauffeured transport to and from a performance at Glyndebourne. The auction lot was so well received that Arthur Rank Hospice Charity Trustee Andy Swarbrick immediately donated a second identical prize, which raised another £2500! Raffle tickets sold throughout the evening raised £1,100 and despite missing out on taking home the trophy for a second year, Santander were extremely lucky with this part of the evening, with their table taking home three prizes.

The Hospice would like to thank: all the individuals and companies who took part; Rathbones for sponsoring the event; Cambridge Union for providing the venue and waiting staff on the evening; Steak and Honour who provided freshly cooked burgers during the interval; and those who donated raffle and auction prizes including Dan Haagman who generously donated the helicopter ride and Cambridge Arts Theatre lots, Andy Swarbrick for the wonderful Glyndebourne offerings, The Cambridge Roar for the signed Ashes Urn & Case replica and framed Chelsea shirt, Andrew Bernard from Innovative Enterprises for the beautiful artwork by Anne Simpson; and Ken Ford who kindly donated the dinner, bed and breakfast for two at the Ship Inn, Brancaster.

The funds raised will be specifically directed towards the £10.5 million required for the Charity’s new purpose built hospice at Shelford Bottom, which is due to open to patients in mid-November.