Electrification of 7,500km of the UK’s major road network would enable most lorries to be powered by overhead charging cables, resulting in dramatically reduced carbon emissions, a new report has found.

A team from the Centre for Sustainable Road Freight (SRF) – bringing together heavy vehicle engineering expertise from the University of Cambridge Department of Engineering and logistics expertise from Heriot-Watt University and the University of Westminster and a consortium of industry partners – has proposed that building a so-called 'electric road system' could be used to decarbonise 65% of UK lorry kilometres travelled by 2040. The technology is not only feasible and scalable, but the infrastructure could be built at an estimated cost of £19.3 billion, using private finance. Full details are published in the White Paper entitled Decarbonising the UK’s Long-Haul Road Freight at Minimum Economic Cost.

The report sets out the case for a nationwide rollout of the electric road system by the late 2030s, with the cost of the project (investment in electrification infrastructure such as catenary cables and substations) paid back over a 15-year period by charging hauliers for the electricity.

Powered by the national electricity grid, lorries driving on the inside lane would connect to overhead catenary cables through an automatic pantograph system – similar to those found on the top of electric trains. The electricity would power both the lorry’s electric motor and recharge its on-board electric battery. The battery, which would be similar in size to an electric car battery, would enable the lorry to complete its journey away from the catenary system. Lorries would be free to leave the catenary wires to overtake, with the pantograph rapidly connecting and disconnecting automatically as needed. 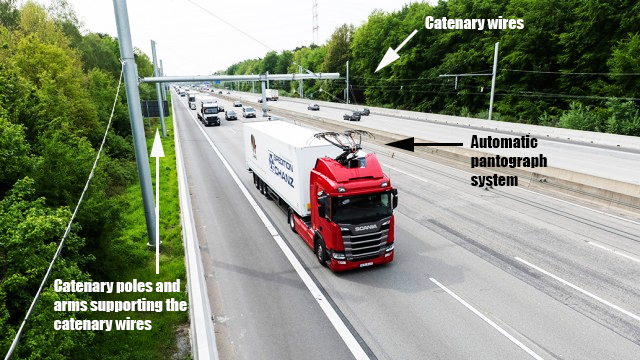 The report’s co-author David Cebon, Professor of Mechanical Engineering at the University of Cambridge and Director of the SRF, said there is now a clear trend towards battery electric vehicles for urban delivery. When combined with pantograph electric vehicles for long haul freight and a decarbonised electricity grid, it will be possible to achieve virtually zero greenhouse gas emissions – a move that is compatible with a zero carbon future.

"The economics are a triple win,” he said. “The cost savings due to energy efficiency are sufficient to pay back the infrastructure investment in 15 years, the investment in pantograph electric lorries in 1.5 years, with enough left over for the government to replace its current income from diesel fuel tax with an excise tax on electricity sales.”

The report suggests that work on the first phase of a four-phase programme could start with an £80 million pilot project in the North East of England, following in the footsteps of Sweden, Germany and Italy, where trials of electric road systems have already taken place. The trial would de-risk the policy, taxation, and implementation issues specific to the UK, prior to the first construction phase, which could start as soon as 2026.