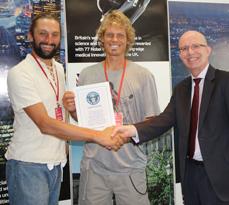 The adventure of a lifetime is over for Amazon rowers Mark de Rond and Anton Wright.

The pair picked up their Guinness World Record certificate at the British Consulate in Sao Paulo yesterday (15 October) after coming ashore for the last time at Macapá, northern Brazil, on Monday afternoon.

Their arrival tweet to the many people around the world who had followed their progress simply said: “We made it!”

A severe tropical storm added last-minute drama to the record-breaking attempt to row the Amazon unaided. Mark and Anton said the storm was so severe that they almost gave up hope of finishing. They described their small, leaky boat as ‘a wreck’.

But with the grueling month-long, 2,077 mile row now behind them, an ecstatic Mark said he was ‘happy, grateful, deeply contented’:

I feel immensely happy to be here. Even 30 hours ago I didn’t think I’d be here. We had been left beached in yet another tropical storm but this time without drinking water and communication: our satellite phone had stopped working. Despite the presence of four fishing vessels there was no response whatsoever to our emergency flares or horn. We were waist-deep in muddy water and facing a badly damaged rudder and rapidly flooding boat. We were saved by a 14-year-old boy out in a fishing boat who alerted his family to help us.”

It has all been a huge learning experience for this academic and ‘carnal sociologist’ who tests theories by pitting his mind and body against extreme and unusual situations, bringing what he has learnt back into the CJBS classroom.

This was always intended in part as a research project into the dynamics of collaboration under pressure. It’s the sort of stuff I’d been looking into for 15 years. To join Anton on this incredible journey was to put my money where my mouth had been for far too long.
The entire experience has been such a rollercoaster of emotions. I’ve felt afraid and vulnerable but I have felt immense gratitude too – often to locals whose hospitality we will never be able to reciprocate.”

And he sent out a heartfelt thanks to all their supporters around the world: “The support has been hugely helpful, particularly during our darker periods. Thanks so much to everyone who followed our blog and tweeted us. Thanks for sticking with us.”

External Affairs Director for CJBS Nathalie Walker said the School’s global reach had been invaluable at the end when one of Mark’s former students, Elise Erikson, leapt to their aid:

The CJBS global network was a great help as Elise, who is Brazilian and did her Executive MBA at the School, helped them sort out logistics at the finish. When the language barrier prevented Mark and Anton from getting their boat into the hands of a shipping company and with only an hour to spare before their flight out of Macapá, she sorted everything out in Portuguese from her home in London, enabling them to get to the airport on time.

We’re very relieved they made it in one piece – the last 24 hours were extremely tough – and we’re very proud that they broke the world record.”

Mark’s past ‘live’ experiments include working with stand-up comedians and doing a stint with the British military in Afghanistan. Each time he has used his experiences to provide his students with real-world insight into how teams and individuals react to difficult situations.

Anton is Chief Rowing Coach at Clare College, Cambridge and an experienced adventure challenge oarsman with the Great River Amazon Raft Race, a row across the Irish Sea and an Atlantic sailing crossing under his belt.

Along with Mark’s research goals, the duo also took on the Amazon to raise funds for the Leonard Cheshire Disability charity and to tackle the Guinness World Record.

Visit the Row the Amazon website for an image gallery, blog and more