Greg Jefferis, group leader in the LMB’s Neurobiology Division, has been awarded the Francis Crick Medal and Lecture 2018 in recognition of his discoveries concerning the developmental and functional logic of sensory information processing. 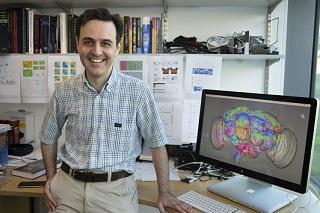 The human brain is arguably the most complex structure in our universe. Understanding how its 100 billion nerve cells control our behaviour is one of the major scientific challenges of our age. It is also a challenge that is of great relevance to human health – it is estimated that one in four of us will have a significant mental health issue during our lifetime.

Greg’s lab is trying to understand basic principles of brain function using a relatively simple model system: the fruit fly, Drosophila. Fruit flies have a miniature brain the size of a poppy seed containing about 100 thousand neurons, but are still capable of surprisingly sophisticated behaviour. By mapping connections between individual nerve cells in the fruit fly brain, Greg’s lab is increasing understanding of how both innate and learned behaviours emerge from these networks. One line of recent work has identified sex-specific switches in pheromone circuits in the brain as well as the genetic origins of these sex differences. A second research area has identified how learned and innate sensory representations are combined and how this interaction is critical to memory recall.

Greg’s work is focussed on understanding basic principles of brain function using a powerful experimental system. However, the genes underlying brain function and development are highly conserved and there is increasing evidence that this is also true for principles of circuit organisation and information processing. It is therefore likely that this work will help in understanding the function of bigger brains in health and disease.

Upon learning of his award, Greg commented:

“It’s amazing to receive a prize connected to two scientists (Crick and Brenner) who have not just been scientific inspirations, but also have such a strong connection to the LMB. I’m also extremely happy that my area of research – genetic approaches to neural circuits and behaviour – is being recognised.

Although it’s lovely to receive a personal award, the body of work being recognised is based on the skill and creativity of many past and present members of our group. Indeed, neuroscience is such a wide-ranging and highly collaborative field that at the last count I have 131 co-authors from across the world, all of whom have made some significant contribution.”

The Royal Society recognises excellence in science and technology through its medals, awards and prize lectures. The Francis Crick Medal and Lecture is given annually in any field in the biological sciences. Preference is given to genetics, molecular biology and neurobiology, the general areas in which Francis Crick worked, and to fundamental theoretical work, which was the hallmark of Crick’s science. Previous LMB winners include Madan Babu Mohan (2016), Sarah Teichmann (2012) and Jason Chin (2009).

Greg will deliver the prize lecture in December 2019, as part of the Royal Society’s public programme of events.