Muddying the waters: rock breakdown may play less of a role in regulating climate than previously thought 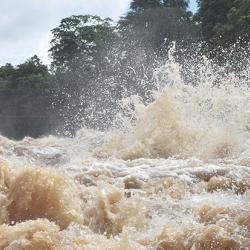 The weathering of rocks at the Earth’s surface may remove less greenhouse gases from the atmosphere than previous estimates, says new research from the University of Cambridge.

The findings, published in PNAS, suggest Earth’s natural mechanism for removing carbon dioxide (CO2) from the atmosphere via the weathering of rocks may in fact be weaker than scientists had thought – calling into question the exact role of rocks in alleviating warming over millions of years.

The research also suggests there may be a previously unknown sink drawing CO2 from the atmosphere and impacting climate changes over long timescales, which researchers now hope to find.

Weathering is the process by which atmospheric carbon dioxide breaks down rocks and then gets trapped in sediment. It is a major part of our planet’s carbon cycle, shuttling carbon dioxide between the land, sea and air, and influencing global temperatures.

“Weathering is like a planetary thermostat - it’s the reason why Earth is habitable. Scientists have long suggested this is why we don’t have a runaway greenhouse effect like on Venus,” said lead author Ed Tipper from Cambridge’s Department of Earth Sciences. By locking carbon dioxide away in sediments, weathering removes it from the atmosphere over long timescales, reducing the greenhouse effect and lowering global temperatures.

The team’s new calculations show that, across the globe, weathering fluxes have been overestimated by up to 28%, with the greatest impact on rivers in mountainous regions where rocks are broken down faster.

They also report that three of the largest river systems on Earth, including the neighbouring Yellow and Salween Rivers with their origins on the Tibetan Plateau and the Yukon River of North America, do not absorb carbon dioxide over long timescales - as had been thought.