Paul Auton: his impact and legacy for Cambridge

Cambidge Network's Executive Director Claire Ruskin writes a moving tribute to Paul Auton, former chief executive of Cambridge Consultants, who has died at the age of 80. 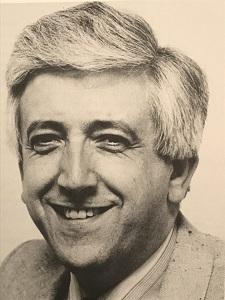 The following is adapted from an article written by Claire, who was at Cambridge Consultants from 1978 to 2000, which was published in the Cambridge Independent this week.

Paul Auton, one of the key people leading the growth of Cambridge technology businesses to the success we see now, was Chief Executive of Cambridge Consultants, one of our iconic Cambridge businesses that found a way to serve the needs of industry and build a whole series of successful products and spin-out businesses.

Paul will be missed by a whole generation of Cambridge business people who learnt from his leadership and challenge, and who created companies that now employ thousands of people, including Domino, CSR, Xaar, Alphamosaic and Inca.

Paul was a natural leader, with business sense that allowed him to recognise that the company was in trouble financially – in fact a shambles.  Paul was invited onto the board under the Chairmanship of Clive Sinclair and in 1972 the near bankrupt business was bought by an American company, Arthur D Little.  Robert Maxwell had put in a bid and the Boston-based management consultancy was viewed with less suspicion.

He encouraged working practices that have been woven into the DNA of the key Cambridge technology consultancies – all of which are destinations for other businesses from around the world seeking innovation.  They specialise in ideas, inventions and the hard graft of science and engineering development through to market.

Paul shared his wisdom, his clarity of thinking and his great sense of humour – we knew what he thought, we were allowed to challenge and we were allowed to build our own castles.  I made a case for setting up an electronic product design group and found I was encouraged.  Friends and colleagues had other ideas and specialised in digital printing, chip design, healthcare or radio systems and we solved difficult problems for other businesses five days a week and created new ideas for the other two days.

Developing bleeding-edge radio systems on chips meant Bluetooth was transformative for Cambridge Consultants, and start-up Cambridge Silicon Radio (CSR) became a billion-dollar global leader just five years after spin-out. CSR was bought by Samsung and Qualcomm, others have been bought by global companies and some have retained their original names.  Cambridge Consultants’ spin-outs Domino, Xaar, Inca and many others are part of the vital Cambridge Phenomenon success that still give the region jobs and diverse employment, through recessions and not over-dependent on any one industry sector.  Collaboration and multi-disciplinary development remain a key part of Cambridge’s success and Paul Auton set out much of the clear thinking and commercial insight.

Paul was part of the small group that supported the formation of Cambridge Network and he was on Cambridge Network’s board in the early days.  Hermann Hauser and David Cleevely both comment that he was not only one of the Cambridge greats but also a wonderful person.  Having contracted polio in his early years Paul’s health was not good, but his poor eyesight didn’t stop him from seeing everything that was going on.  He was the best umpire at the cricket matches between local businesses in the 80s and a weak report would never get past him.

Paul moved to Chairman in 1998 having appointed Howard Biddle to take over as his successor Chief Executive, before retiring in 2001.

In 2014 Paul officially opened Cambridge Consultants’ new building, aptly named Auton in his honour; a fitting tribute to the impact Paul has had, from CC’s business practices to its core values.  The company still blends the fun touches with very challenging work – the Auton range of beer was created specially for the event.

Cambridge Consultants’ current Chief Executive Eric Wilkinson joined Cambridge Consultants in 1991, when Paul was already CEO.   “I recently revisited his “Ten Commandments of Project Reviewing”, written in the late 1980s, and it could have been written yesterday.   Paul was a man who effortlessly fused leadership, clarity of thought and a keen sense of good humour. Life at Cambridge Consultants could be demanding, but that was no reason not to have fun.  Our thoughts go out to Paul’s family and all that knew him.”

Read the original article in the Cambridge Independent here>>>

Cambridge Network is a membership organisation based in the vibrant high technology cluster of Cambridge, UK. We bring people together - from business and academia - to meet each other and share ideas, encouraging collaboration and partnership for shared success. ...