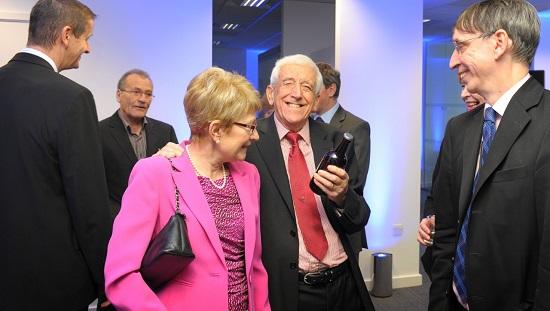 Paul Auton, former CEO of Cambridge Consultants, had such a profound impact on our business that we named a building after him.

Changes to government procurement through the 1980s drove Cambridge Consultants to focus more heavily on commercial lines of business. Paul was appointed CEO in 1983 and set about leading this transition. In this capacity he developed working practices that have been woven into our DNA. I recently revisited his “Ten Commandments of Project Reviewing”, written in the late 1980s, and it could have been written yesterday.

The business continued to grow through the 1990s with the creation of a medical technology business stream and a strong ASIC practice. The emergence of Bluetooth was transformative for Cambridge Consultants, and one of our spinouts Cambridge Silicon Radio (CSR) became a billion-dollar global leader just five years after spinout. Howard Biddle took over as CEO in 1998 and Paul became Chairman, before retiring in 2001.

In 2014 Paul came to officially open our new building, named Auton in his honour. This was a fitting tribute to the impact he’d had, from our business practices to our core values.

I joined Cambridge Consultants in 1991, when Paul was already highly respected. My own memories of him are of a man who effortlessly fused leadership, clarity of thought and a keen sense of good humour.

Life at Cambridge Consultants could be demanding, but that was no reason not to have fun. Our thoughts go out to Paul’s family and all that knew him.

See also : Paul Auton: his impact and legacy for Cambridge