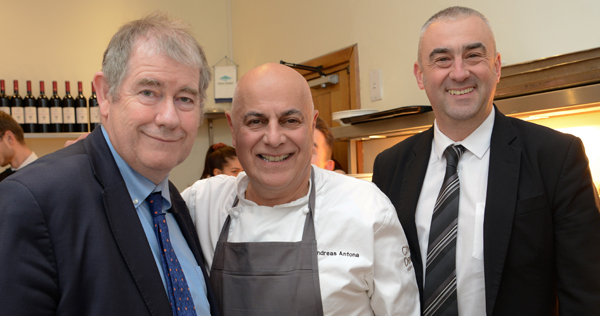 St John's  College has strengthened its commitment to sustainability by holding a special evening featuring environmental presentations and concluding with a four-course tasting menu created by two of the UK’s leading Vegan chefs.

The four-course Vegan tasting menu was prepared by Andreas Antona and Luke Tipping from Simpsons Restaurant in Birmingham, a Michelin-starred restaurant ranked in the top ten Vegan Restaurants in the UK and in the top 40 in the world.

Bill Brogan, Catering & Conference Manager at St John’s College said: “We were delighted to host this high-profile event which raised further awareness of the importance of sustainability.

“The hard-hitting presentations focused everyone’s minds on the challenge ahead, with the Vegan tasting menu illustrating how we can create world-class cuisine using sustainable ingredients. I’d like to thank Nick White of the University Centre and Ivan Higley of Darwin College from the Sustainability Committee of the Colleges’ Catering Managers Group who helped me to organise the occasion.”

Nick White has held pop-up Vegan events with other Cambridge Colleges and was the winner of the Sustainability Award at The University Caterers’ Organisation (TUCO) Conference in 2018.

The Cambridge Colleges offer an extensive portfolio of venues, which can be hired for all kinds of functions. From a traditional room for a family celebration, academic ambience for a board meeting, to a state-of-the-art auditorium, Meet Cambridge, the official, free venue-finding service, can source the right location for you.