Wireless team at Cambridge Consultants to expand by 20 per cent

Leading technology design and development firm Cambridge Consultants is on a recruitment drive to grow its wireless team by more than a fifth. The move comes as the company experiences growing demand for its ability to solve complex wireless problems and provide innovative solutions in the application of wireless technology. 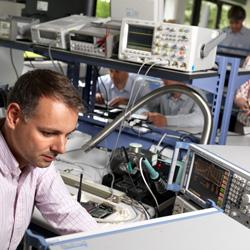 Developing wireless technology and applications across a wide range of industries – from mobile health and connected devices, to satellite and beyond – and ensuring clients can bring products and services to market faster, is a service that is highly valued by companies in an increasingly mobile and wireless world. According to ABI Research, more than 30 billion devices will wirelessly connect to the ‘internet of everything’ by 2020.

Over the years, Cambridge Consultants has helped its clients to develop the world’s smallest satellite data terminal, the world’s first single-chip Bluetooth radio, the world’s first GSM videophone for Orange, Europe’s first FCC-approved UWB (ultra-wideband) product, and the radios that manage over 50% of the world’s airspace. Recently, the company was also appointed to play a key role in the deployment of Iridium NEXT – Iridium’s second-generation satellite constellation and the world’s most significant commercial space programme, which is expected to begin launching in early 2015.

Head of wireless at Cambridge Consultants, Richard Traherne, said: “Cambridge Consultants’ wireless capabilities are not tied to a particular technology or standard, ensuring the best solution for our clients’ technical and commercial needs. Our ability to solve complex technical issues, create new wireless solutions and apply wireless technology to a multitude of applications and industry sectors, is what sets us apart. It is this sheer diversity of opportunity that we are offering new recruits, as well as access to the capabilities of the company’s fully equipped state-of-the-art RF and electronics laboratories.”