Marshall Motor Holdings has today confirmed its flotation. The London Stock Exchange this morning announced the group had completed its initial public offering, which values the business at £115.1 million. 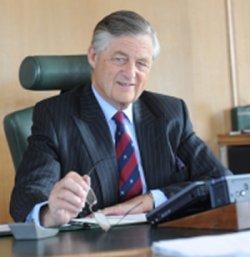 Marshall of Cambridge (Holdings) Limited, the private holding company of the Marshall family, is delighted to announce today that it will be completing the flotation of its successful Marshall Motor Holdings business on AIM, a market operated by the London Stock Exchange.

The announcement, confirmed by the Stock Exchange this morning, clears the way for shares in Marshall Motor Holdings plc to begin trading on the AIM market on Thursday (April 2).

Commenting on the announcement, Sir Michael Marshall, Chairman of Marshall of Cambridge (Holdings) Ltd (pictured) said: “This is an exciting day for Marshall. We are proud to have nurtured our motor businesses for more than 105 years, since they were founded by my grandfather in 1909. We are delighted now to see them become a free‐standing, independent company and we look forward to watching their progress. We wish everyone in Marshall Motor Holdings all the very best for the future.”

Robert Marshall, Chief Executive of Marshall of Cambridge (Holdings) Ltd added: “We are absolutely committed to supporting the development plans of all Marshall companies in the long term. This flotation will benefit Marshall Motor Holdings and will also allow us to concentrate our internal resources on investing in the ambitious plans we have for our engineering businesses.”

Marshall of Cambridge (Holdings) Ltd continues to be the majority shareholder in MMH, which will now operate on a day‐to‐day basis as an independent company subject to the AIM rules.

Marshall was founded in Cambridge in 1909 by David Marshall MBE, as a chauffeur drive business before moving into the retail motor industry in 1912. The Company first entered aviation in 1929 when it opened its first aerodrome, before moving to its current site in 1936. Marshall Motor Holdings comprises Marshall Motor Group and Marshall Leasing.