AVEVA, the engineering, design and information management software leader, has been named Britain’s Most Admired Company in the Software and Computer Services Sector 2017 for the third time, having previously won the award in 2014 and 2015. 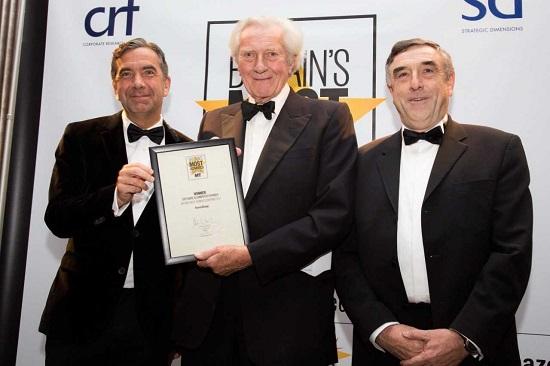 Presented by The Rt Hon the Lord Heseltine CH at the awards ceremony held at Claridge’s this week, AVEVA was selected for the Management Today award ahead of its peers. AVEVA was recognised after scoring highly in categories including quality of products and business innovation.

‘This is a great accolade for AVEVA and I am delighted that we have been named Britain’s Most Admired Company in the Software and Computer Services Sector for a third time’, said James Kidd, Chief Executive Officer, AVEVA. ‘Although this recognises us as the best of British, we are a global organisation with over 1700 people in over 30 countries. The criteria for this award can only be met by having outstanding people who go above and beyond the call of duty to support the business and our customers. I personally want to say thank you to everyone across the company for their continued hard work and efforts. Without our people, AVEVA wouldn’t be the company it is.’

The BMAC award is presented just a few weeks after AVEVA was named Employer of the Year at the recent Women in Science and Engineering (WISE) Awards.

Steen Lomholt-Thomsen, Chief Revenue Officer, AVEVA, who collected the award added, ‘Winning two awards in the space of a few weeks is a wonderful way to round off our 50th anniversary celebrations. It demonstrates that we are excelling in many areas and are being recognised for this. We are entering an exciting and significant stage in AVEVA’s history, as we are set to become one of the world’s largest industrial software companies, when we combine AVEVA with the Schneider Electric Software Business in the coming months. Although we will expand our global footprint even further during our next milestone, AVEVA will be cherishing its British heritage, remaining headquartered in the UK’.

‘I want to congratulate AVEVA on winning Britain’s Most Admired Companies Software and Computer Services sector award for the third time,’ said Adam Gale, Editor, Management Today. ‘AVEVA has once again emerged triumphant as voted for by its most clued-up critics, its competitors. The awards are a revealing exercise that really gets to the heart of what makes businesses succeed. Britain's Most Admired Companies awards celebrate that vital ingredient: what it takes to be admired by your closest rivals. Well done AVEVA’.

AVEVA is a global leader in engineering and industrial software driving digital transformation across the entire asset and operational life cycle of capital-intensive industries. ...