When it’s raining cats and dogs

By Carlos Eriksson, Accessibility Lead Developer at Studio 24In which we learn that autism isn’t what we think it is and how to design with people on the autistic spectrum. 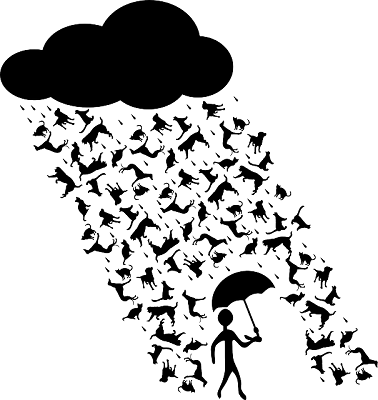 That was the first thing that came to mind when my son was diagnosed with autism two years ago.

His diagnosis didn’t come as a surprise, instead, every moment I had been impatient with him replayed in front of me and I felt guilty and ashamed.

Despite working with people with autism in the past, and constantly learning about neurodiversity I felt embarrassingly unprepared to help him.

So I did what I imagine any parent would do, I researched and learned how to be a better dad.

I trawled through article after article about the clinical definition of Autism Spectrum Disorder (ASD), got recommended an amazing book called The Curious Incident of the Dog in the Night-Time, and read about the unethical practices of Applied Behaviour Analysis.

Autism isn’t what you think it is

“It’s a spectrum– we’re all a little autistic,” many people who don’t have autism say.

Autism is absolutely a spectrum, but it isn’t what you think it is.

It isn’t what I thought it was.

Because despite calling it a spectrum, we often talk and think about it as if it was a scale.

As if one can be a little, medium, or a lot autistic.

In reality, autism isn’t a single condition, it’s a collection of related neurological differences that affects how we see the world and interact with people. It’s often characterised by struggling to understand emotions in others and oneself, by difficulties in social interaction and communication, as well as self-stimulating behaviour (stimming).

Being autistic makes idioms such as “it’s raining cats and dogs” hard to understand.

Its figurative meaning “it’s raining a lot” is lost to a literal interpretation of the phrase.

Estimates for the number of people who are on the autistic spectrum vary from study to study and most research is exclusively on children.

But given that autistic children become autistic adults and that the results from the adult-studies that do exist suggest that the prevalence of ASD is the same for adults (PDF), then the estimates are transferable.

About one in 160 people worldwide have autism.

At 47 million people, that’s more than the entire population of Spain.

It’s also worth remembering that girls and women are often undiagnosed because most of the research is based on boys and men, and ignores social conditioning.

Some well-controlled studies in Sweden have actually reported substantially higher results and the diagnostic criteria are changing as we learn more.

By designing with people on the autistic spectrum, we build mindful digital services and products from the start. Ones that will never subject people to too much sensory information, and instead allows them to personalise those services to meet their needs.

Autism is a complex collection of neurological differences, and adults with ASD are often unrecognised and socially disadvantaged because of it.

And it isn’t just autism itself that is complicated, its surrounding environment is as well.

There’s a lot of organisations such as Autism Speaks and the Judge Rotenberg Center who claim to advocate for autistic people but in reality subject them and their families to unethical practices and so-called treatments which are thinly veiled abuse.

Meanwhile, the misinformed anti-vaccination movement denies over two decades of extensive research and studies proving, time after time, that there’s no link between autism and vaccinations.

The fact is that vaccines save lives; they don’t cause autism.

As for my son, well, I’ve now met another person with autism, and I will continue to ask how I can best help him.

To start with, I can stop using idioms, confusing him with the idea that the precipitation contains felines and canines, and instead simply say, “it’s raining a lot.”

Image by OpenClipart-Vectors from Pixabay