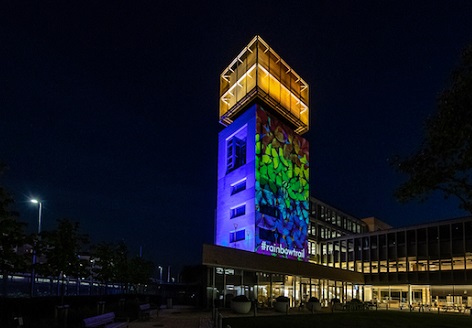 On Thursday night, the team of event professionals responsible for lighting up landmarks throughout the city returned for the sixth week.

The gesture focused on applauding the commitment of educators, researchers and all keyworkers during the current lockdown.

Cambridge Assessment’s Triangle is one of the city’s tallest buildings and at night gently glows the colour of academic parchment paper. On Thursday evening, it became a beacon across the skyline, accentuated with blue to bring it in line with the #makeitblue campaign.

“Across Cambridge Assessment and Cambridge University Press we have been working hard to help students, teachers and researchers in these challenging times, and we thank them for their commitment to education and research. Parents and carers are having a bigger role than ever in children’s education, and we thank them for that too.” - Saul Nassé, Chief Executive for Cambridge Assessment

The world’s oldest publishing house, Cambridge University Press and its former home of over 100 years, The Pitt Building, were also bathed in colour for the week’s #LightItBlue efforts.

“These are extraordinary and challenging times, and everyone here at Cambridge University Press and Cambridge Assessment wants to acknowledge the continued hard work and sacrifice of health workers and carers who are on the front line of this outbreak. This is one way for us to say a very big thank you to them for all that they are doing." - Peter Phillips, Chief Executive of Cambridge University Press

These buildings are all steeped in Cambridge’s publishing and academic history so were fitting backdrops for this week’s #makeitblue campaign.

The #shinebright team were contacted by Cambridge Assessment’s Group Events Manager, Carri Pavvitt who said, “It has been a fantastic opportunity to work with Cambridge event production teams to create a light installation that says thank you to keyworkers across Cambridge, the UK and the world. I have been really impressed by their previous installations and it is wonderful to be able to offer our buildings to be this week’s canvases. The professionalism and creativity of the teams in its creation have to be admired; I have been very impressed by the work of so many of the local independent businesses throughout the lockdown to support our community.”

The #ShineBright team is made up of kind-hearted event professionals: The Crane Event, JMPS, Pink Lamp, Blueshed and JezO’s.