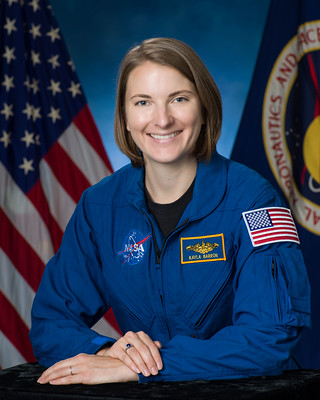 Gates Cambridge Scholar and NASA astronaut Kayla Barron has been selected for the Artemis Team, making her eligible for the next astronaut missions that could see her become the first woman to walk on the Moon.

The announcement was made during the eighth National Space Council meeting held at NASA’s Kennedy Space Center in Florida. NASA has selected 18 astronauts from its corps to form the Artemis Team and help pave the way for the next astronaut missions on and around the Moon as part of the Artemis programme. The agency’s modern lunar exploration programme will land the first woman and next man on the Moon in 2024 and establish a sustainable human lunar presence by the end of the decade.

NASA Vice President Mike Pence, who introduced the members of the Artemis Team, said: “I give you the heroes who will carry us to the Moon and beyond – the Artemis Generation. It is amazing to think that the next man and first woman on the Moon are among the names that we just read. The Artemis Team astronauts are the future of American space exploration – and that future is bright."

The astronauts of the Artemis Team will help NASA prepare for the coming Artemis missions, which begin this year, working with the agency’s commercial partners as they develop human landing systems; assisting in the development of training; defining hardware requirements; and consulting on technical development.

Alumna Kayla Barron was chosen as an astronaut in 2017, alongside Cambridge lecturer at the Department of Engineering, Dr Jenni Sidey-Gibbons (Canadian Space Agency). Prior to this, Kayla achieved a Master's degree in Nuclear Engineering from the University of Cambridge, where she conducted research on modelling the fuel cycle for a next generation, thorium-fuelled nuclear reactor concept. As a submarine warfare officer, Kayla was a member of the first class of women commissioned into the submarine community. She is a lieutenant commander in the U.S. Navy.

Meanwhile, NASA and the Canadian Space Agency (CSA) have announced that they will collaborate on the Gateway, an outpost orbiting the Moon. It will provide vital support for a sustainable, long-term return of astronauts to the lunar surface as part of NASA’s Artemis program. Under this agreement, CSA will provide the Gateway’s external robotics system, including a next-generation robotic arm, known as Canadarm3. The agreement also marks NASA’s commitment to provide two crew opportunities for Canadian astronauts on Artemis missions, one to the Gateway and one on Artemis II – the first crewed flight test of the Space Launch System and Orion spacecraft around the Moon, that is targeted for launch in 2023.

Dr Sidey-Gibbons is among the CSA's active astronaut corp. It is not yet known which of the Canadian astronauts will be selected.

The Honourable Navdeep Bains, Minister of Innovation, Science and Economic Development, who is responsible for Canada’s space programme and who made the announcement, said: “This is a significant moment in Canada's space history. The Canada–U.S. Gateway Treaty takes Canada to the Moon for the first time. Our country will collaborate with the most advanced space organisations in the world on cutting-edge science and technology for the benefit of humankind. As Canada joins the U.S. and other international partners in this great adventure, our continued leadership in space robotics will be a source of national pride – and all eyes will look to the sky as one of our astronauts becomes the first Canadian to travel around the Moon.”