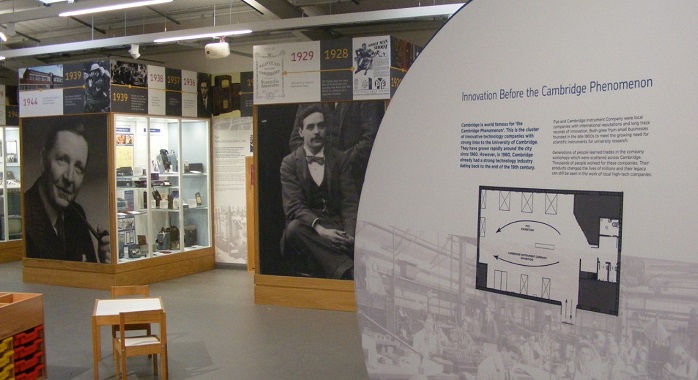 Cambridge Museum of Technology is delighted to have been named joint Large Museum of the Year at the Museums in Cambridgeshire Awards 2019.

The judges reported that they reviewed strong applications for the award. Two museums received the same score from the judges and equally high praise from their mystery shoppers, therefore the panel named both Cambridge Museum of Technology and Museum of Zoology joint Large Museum of the Year.

The ceremony was held at the Museum of Zoology on Monday 4th November and the Large Museum of the Year award was presented by Liam Wiseman from Arts Council England. Announcing the award, he said:

“The first of our winning museums has undergone a complete transformation over the past year. Its painstaking refurbishment and the dedication of its staff to putting its collection at the heart of everything it does means that the museum not only meets the expectations of a 21st Century visitor, but as a leading repository of information about Cambridge’s industrial past, places itself at the heart of Cambridgeshire’s heritage offer. Judges were delighted to see the museum developing programmes celebrating women in STEM and constantly finding creative ways to engage new visitors and business partners, from local manufacturers to tiny alien beings that crash landed their spaceship at the museum entrance.  Their team of staff, Trustees and volunteers are exceptional.”

It has been a monumental year for Cambridge Museum of Technology because it reopened in June a major redevelopment funded by the National Lottery Heritage Fund. The project included installing new displays, improving access and facilities, and restoring the historic boiler so that the Museum can run its steam engines again.

Pam Halls, Curator, says, “The redevelopment has realised the Museum founders’ dream of creating a museum celebrating Cambridge’s technological innovation. We are no longer a historic building with industrial oddments, but a real museum of Cambridge technology.”

Reviews and visitor feedback since the Museum reopened have been very positive. Comments have included, "It has changed beyond recognition." “Well presented and thought provoking insight into aspects of Cambridge Industry.” "Everything is well-presented and how the machines work is very well-explained, which is important in a museum dealing with complicated processes." "I hope this museum succeeds as it is a pure gem." "Really interesting!!" "So informative. Restored from the heart. Will return."

Public response to the Museum being named Large Museum of the Year has been equally positive. One Facebook user commenting, “Wonderful to see the Cambridge Museum of Technology being recognised at long last! The Museum is the Jewel in Cambridge's Crown!"

The team at Cambridge Museum of Technology is overjoyed with the award and hope that it will encourage more people to visit and enjoy all the Museum has to offer.

About Cambridge Museum of Technology

Cambridge Museum of Technology is the home of our industrial heritage. Based in the city’s Victorian sewage pumping station, the Museum helps people to explore, enjoy, and learn about their industrial heritage by celebrating the achievements of local industries and the people who worked in them.

The Museum reopened in June 2019 after a major redevelopment funded by the National Lottery Heritage Fund.