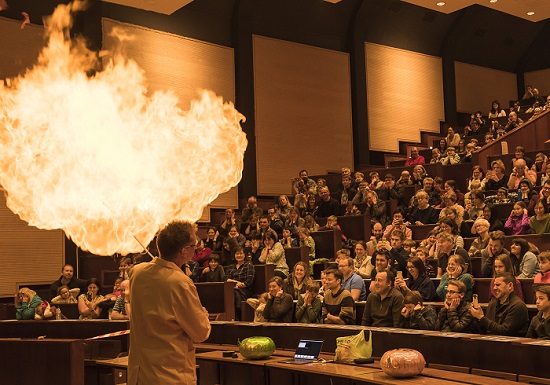 Predictive policing, mini organs, growing food underground, global mega-fires and the limits of human endurance. These are a few of the topics explored during the 26th Cambridge Science Festival, which is set to host 390 events between 9 – 22 March at venues across the city.  The theme this year is ‘vision’.

Run by the University of Cambridge, the 2020 Festival examines our past and suggests a vision for the future. Some of the world’s greatest scientists, alongside the stars of the future, examine how science is changing our world. Climate features heavily as do health and new technological advances alongside fun science quiz events, comedy and theatre.

As ever, there is a range of talks and debates which reveal how scientists are working to understand and solve some of the greatest challenges of our time. Top picks include:

The first weekend of the Festival sees hundreds of events for families, including talks on the fastest animals on earth, and weird, mind-fizzingly awesome and funny science facts; hands-on demonstrations with Microsoft HoloLens; robotic workshops; and a virtual reality cycle ride. Festival favourite, Dr Peter Wothers returns for another loud, action-packed talk showcasing the elements involved over the centuries in mankind’s quest to light his way. Further events explore what animals see, the science of snot and magical maths tricks.

The second week kicks off with a talk about CRISPR technology and the future of genome editing (16 March). The discovery of CRISPRCas9 genetic engineering technology has changed genomics research forever. Co-discoverer Professor Jennifer Doudna, University of California, Berkeley, discusses the implications of this new gene-editing tool and approaches to policies around its use.

Further talks and debates include:

The second weekend is once more dominated by events for families. On Saturday, visitors can get hands-on with cutting-edge biomedical science at the Vet School; find out how CRISPR gene-editing technology can be used to fight superbugs, how research on the ageing process in dogs can inform human medicine, and how bat conservation could help reduce pandemic risk. British Antarctic Survey, Institute of Astronomy, Wellcome Genome Campus, Cavendish Laboratory, and various museums and University Departments open their doors to the public. Visitors can discover what it takes to be a Polar explorer, study the skies through telescopes, see developments in medical implants, discover why robots are not going to take over the world, immerse themselves in Virtual Reality, and much more. On Saturday evening, the Centre for Computing History hosts the Family Gaming Night. With games from retro classics like Pac-Man and Space Invaders through to modern examples like Wii, PS3, Xbox 360 and Xbox One.

The final day of the Festival focuses on health. A range of events cover everything from the history of HIV, to stem cells, infectious diseases, cancer and new therapies. There are also brain training games, a pop-up escape room, and some messy play with the colourful world of bugs, germs, bacteria, viruses, parasites and fungal infections.

In addition to the hundreds of talks and debates, the Festival hosts a range of exhibitions, performances and tours. These include an interactive art installation exploring the Climate Bee-Mergency, and The biosphere project, a visually enthralling exhibition by international artist Joaquín Fargas, raising awareness about important issues around the preservation of Earth. In Our disgusting planet, Belle Taylor and Char Mykura bust some taboos and normalise the disgusting through frank, funny and filthy comedy. The Botanic Garden also launches a new trail, Plants inspiring technological innovation, which explores plants around the Botanic Garden that have already solved many of the problems we are currently facing.

Speaking ahead of the Cambridge Science Festival, Dr Lucinda Spokes, Festival Manager, said: “The programme this year is focussed on ‘vision’: where we were, where we are, and where we hope to be. Science offers huge possibilities to change the course of our planet for the better. With this year’s programme, we hope to inspire and excite our visitors about these possibilities.

“As ever, we have endeavoured to tackle some of our greatest challenges through a range of events including talks, debates, performances, comedy, film, tours and exhibitions. We look forward to welcoming and actively engaging with our audiences in March, hearing their views and thoughts about current and future scientific research.”

You can download the full programme via Cambridge Science Festival.

Bookings open on Monday 10 February at 11am.