Cambridge in the top five tech hubs for VC investment in the UK in 2020, says Tech Nation report launched today

The annual Tech Nation report launches today: lifting the lid on how UK tech boomed in 2020

In its 7th year, the report lifts the lid on tech in an extraordinary 2020, revealing how the sector has changed, who the top performers were through the year, and the challenges and opportunities the UK faces as it navigates out of the pandemic and leaving the EU.

Prime Minister, Boris Johnson said: “The UK is maintaining its lead as one of the world’s premier centres for tech of all kinds. While the real credit lies, as ever, with the engineers and designers toiling away at laptops across the country, I’m immensely proud to lead a government that is so comprehensively committed to supporting the sector. We’re continuing to invest in your success, and I hope that the winning combination of UK tech and this government will lead us to yet another record-breaking year in 2021.”

Digital Secretary Oliver Dowden said: "With record levels of investment secured and UK listings gaining momentum, this report shows Britain's tech sector continues to go from strength to strength, solidifying our position as one of the world's top tech hubs.

"We want to bring about a golden age of UK tech through a raft of supportive measures and funding to help businesses thrive. This will help fuel a booming tech sector - creating jobs and improving services so that we can build back better from the pandemic."

Gerard Grech, founding chief executive, Tech Nation, comments: “This year has highlighted the UK tech sector’s enormous resilience and world-beating innovative spirit. In the face of a major global crisis, it has not only survived; in many areas, it has boomed. From EdTech to HealthTech, tech scaleups are at the centre of rebuilding the British economy and setting new standards worldwide.

“Now the focus turns to the future, as the UK pivots to a wider global role. Developing Britain’s AI-powered deep-tech is especially critical. Much of our future economy will be built on this new technology that leverages machine learning for faster innovation. Bold investment is needed in R&D to boost Britain’s new deep-tech companies and ensure our global competitiveness.”

“These are truly exciting times for UK tech. The successes of the past decade have shown what the UK is capable of when policy foresight, investment and a diverse and ambitious pool of talent come together. By continuing to set our sights high, the next decade promises to be the most innovative yet."

In 2020, the UK tech scaleup ecosystem continued its strong growth. Valued at $585bn, startups and scaleups more than doubled (120%) their collective value since 2017. In comparison, the next most valuable European scaleup ecosystem, Germany, was valued at $291bn.

Driving UK tech into new heights in 2020 were 10 superstar scaleups, which between them secured 20% of total UK tech VC investment, at $3.5bn.

Octopus Energy, Arrival, Cazoo, Gymshark, infobip, Gousto and Hopin were the seven unicorns to make it into the unicorn class of 2020, bringing the UK’s total unicorn count in 2020 to 80. An additional 6 unicorns have already been created so far in 2021, Blockchain, Kymab, PPRO, Touchlight Genetics, Starling Bank and Zego. Hopin, the online events platform which raised $150 million in 2020, has gone on to raise a further $400 million Series C round from US VC, Andreessen Horowitz and General Catalyst with a valuation of $5.65bn.

Fintech challenger, Revolut, and insurance platform, Ki, helped to cement the UK’s position globally for fintech and insurtech. Revolut raised $580 million over the course of 2020, while Ki raised $500 million in its bid to redefine the commercial insurance market.

Despite uncertainty caused by the pandemic, UK Tech IPOs gained strong momentum in 2020, signalling the UK’s attractiveness for tech companies and the continued health of the UK late-stage tech ecosystem. Eight of the UK’s tech companies IPO’d on the LSE in 2020, raising a total of £3.1bn.

When compared with 2018, 2020 had double the amount of capital raised through IPOs. A notable highlight in 2020 was Manchester-HQ’d The Hut Group’s IPO (THG), Europe’s largest-ever eCommerce IPO, which raised £1.9bn at a market capitalisation of £5.4bn.

Tech and consumer internet firms are increasing their share of capital raised through IPOs on the LSE, accounting for 40% on the London Stock Exchange in 2020. 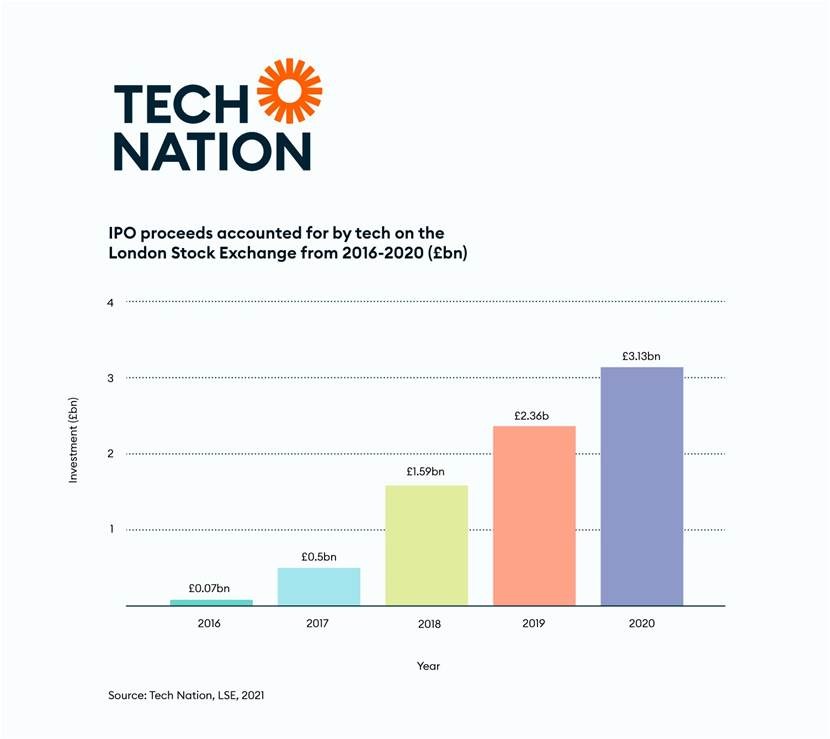 In 2020, tech and consumer internet firms raised £7bn in follow-on capital, enabling them to acquire and invest at scale and speed. Despite the pandemic, technology companies have been able to use their public listing to raise capital on tight timetables. This shows how listed tech companies are able to draw on investor support to drive their businesses forward, financing ambitious growth strategies with long-term, repeat capital raisings.

Part 3: Record-breaking tech investment in 2020 with the UK once again leading Europe:

There was also a record level of VC investment in 2020 into UK tech companies, despite the backdrop of the global pandemic. Investment reached $15bn, $200mn higher than 2019’s record breaking year. Investment gained momentum throughout 2020, reaching a peak in December 2020 at $1.9bn. The UK hubs driving investment were London, Oxford, Bristol, Cambridge and Edinburgh. 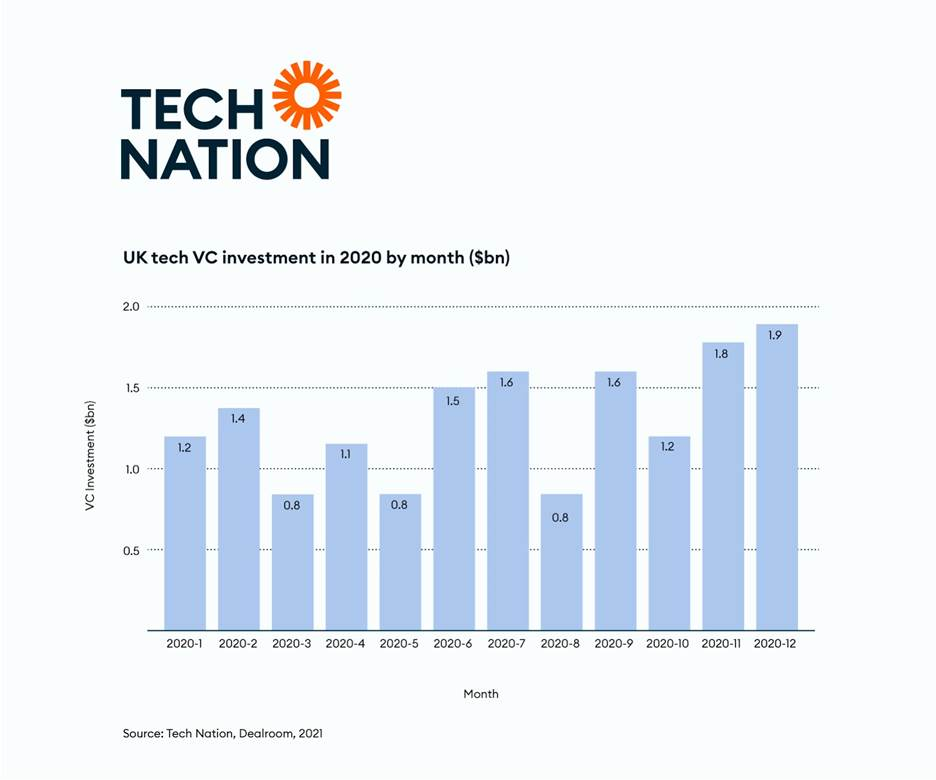 This places the UK third highest globally, behind the US ($144.3bn) and China ($44.6bn). The UK has made further strides in closing the gap behind China, which faced a drop in investment in both 2019 (-50%) and 2020 (-3%). The UK is also, once again, leading Europe for VC investment in tech, with Germany and France ranking fifth and sixth for total VC investment globally. 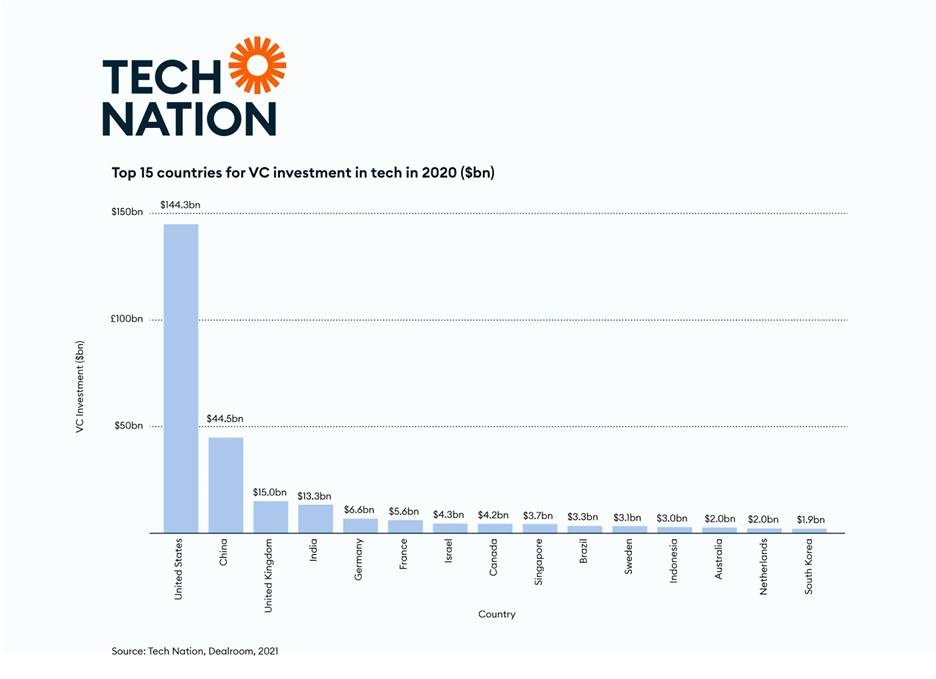 Data reveals a surprising UK sector champion - transport tech - which had a 160% boom in VC investment in 2020 taking it from $650mn to $1.7bn. This was driven by companies such as Arrival, which netted $400m in Growth Equity, and investments into scaling companies made in the second half of 2020, such as Marshmallow, Cazoo, Freeflow Technologies, and Elmtronics, which signal the burgeoning demand for disruptive technologies to innovate in the transport sector. VC investment in transport tech is also on the rise globally - up by 13% in 2020 to $44bn.

In 2020, VC investment in deeptech increased by 17%, rising to just under $4bn. This represents the highest rate of growth globally, with the US, China, and Israel all seeing relative decreases in investment. This builds on the UK’s rich history in R&D and strong deeptech ecosystem, with established companies such as ARM and Graphcore driving global success. 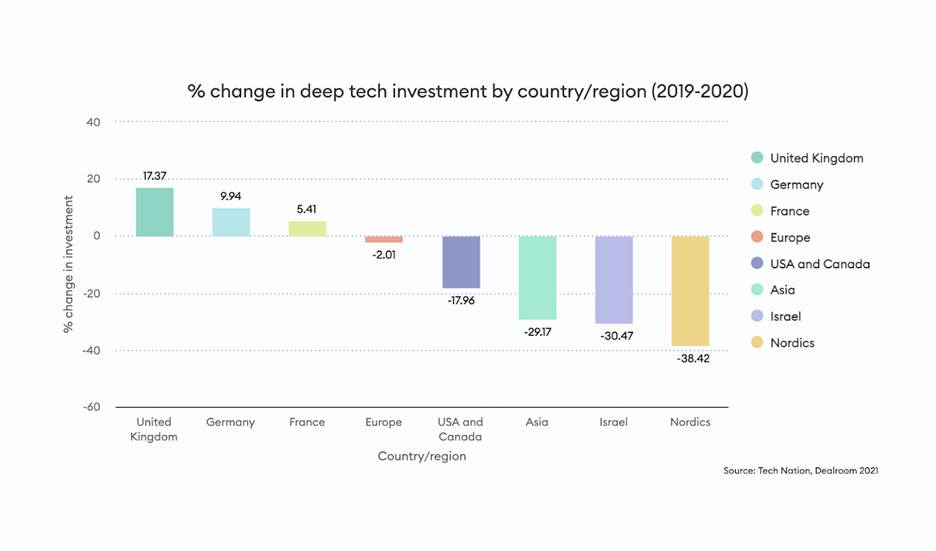 Last year transformed Net Zero into a subject of global interest. In this time, the UK ramped up investment into impact startups, with investment more than doubling (160%) since 2018 to $2.6bn. This puts the UK third in the world for total impact tech investment – behind only the US ($11.4bn) and China ($2.9bn).

On the other hand, while the UK is still second in the world for VC investment into fintech - VC investment dropped by 23% to $4.5bn. This may be a result of some later stage fintechs broadening their investment base as the sector matures. Fintechs such as Molo, iwoca, and MarketFinance shifted to debt financing, with all three raising sizable debt finance rounds in 2020.

Part 5: The next decade - challenges that lie ahead:

With UK tech going from strength to strength, it’s becoming increasingly fundamental to UK economic growth. The rate of tech GVA contribution to the UK economy has grown on average by 7% per year since 2016. And, with the UK unemployment crisis high on the national agenda, data shows there are nearly three million jobs in the digital tech economy - more than either construction (1.9mn) or financial services (1.2mn).

But UK tech still faces significant challenges ahead in an increasingly competitive global landscape, with both challenges and opportunities presented by global capital flows, R&D shortfalls, and the levelling-up agenda.

In 2020, non-UK investment represented 63% of total VC funding of UK tech. For later stage investments, this is even more pronounced. Two thirds (65%) of funding rounds between $100 and $250mn, and three-quarters (76%) of rounds $250mn+ included a non-European or UK investor in 2020. While this does reflect the strength and burgeoning international reputation for investment returns in UK tech, it also surfaces the potential for national security concerns, with UK tech firms to become increasingly majority-owned by non-UK actors in the future, while also signifying a shortfall of late stage domestic investors.

VC investment continues to be gravitated towards London, with the gap growing over the past three years. The percentage of total UK VC investment made into London has increased from 73% to 88% between 2018 and 2021. The UK is a world-leading tech centre because of the collective strength of its regional tech clusters, so they must be supported in their growth journey by the development of more targeted regional investment funds with the firepower and risk attitude to level the funding playing field for companies outside London.

The UK is trailing on R&D, with some private overseas companies investing more in R&D than the UK does as a nation. Data from the ONS finds that UK R&D expenditure (public and private spending) was just under £30bn in 2018, whilst in the same year, the combined R&D expenditure of Amazon and Alphabet (on their own R&D activities) was £33bn. Comparing this on the global stage, total US R&D expenditure in 2018 reached $551bn, while China’s R&D expenditure reached $463bn.

As the potential of technologies like AI, machine learning and quantum computing become fully realised and applied at scale, the UK will have to find ways to ramp up the R&D intensive capabilities it possesses and capitalise on a record year for deep tech VC investment, which increased by 17% to just under $4bn in 2020.