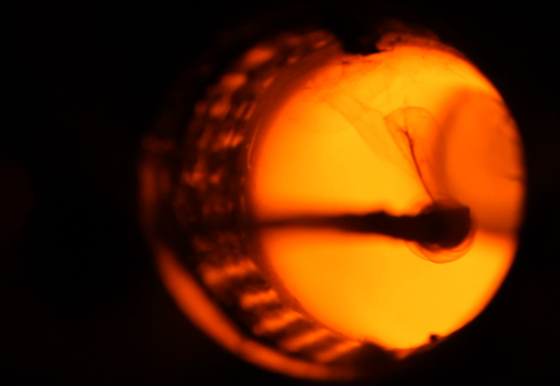 Ultra-light, high performance electrical wiring, made from carbon instead of copper, has been developed in a usable form for the first time.

“No longer are we talking about millimetre-long, minute samples.” — Krzysztof Koziol﻿

Super-strong wires made from carbon nanotubes, which could significantly improve the efficiency with which electricity is supplied across the UK have been developed in a usable form for the first time.

The wires are one tenth the weight of copper, and, if used in conventional systems, would also make vehicles more fuel efficient. The wires, developed by researchers at the University of Cambridge can also be joined to conventional metal wires, which until now has not been possible, raising the prospect of hybrid energy networks.

Carbon nanotubes (CNTs) are extremely thin, hollow cylinders made of carbon atoms. They are among the stiffest and strongest fibres known, but the difficulty in precisely controlling their properties has meant that their practical applications have been limited until now.

Like graphene, CNTs are strong, lightweight and flexible. The angle, or chirality, at which the sheets of graphene are rolled determines the properties of the nanotubes: whether they are metallic, semi-metallic, or semiconductors.

Now, researchers at the University of Cambridge have achieved an unprecedented level of control over the properties of CNTs on a large scale, resulting in nanotubes which can be used in electrical systems.

Copper wiring is used in electrical systems because of its proven history and excellent electrical conductivity. However, in modern systems, wiring deficiencies are becoming more apparent as functional demands increase. For example, a large satellite, weighing 15 tons or more, derives one-third of its weight from copper wiring. Similarly in commercial aircraft, a Boeing 747 uses as much as 135 miles of copper wire, weighing more than two tonnes. Copper wires also oxidise and corrode, are susceptible to vibration fatigue and create premature electronics failures due to overheating conditions.

According to ExxonMobil’s 2010 report The Outlook for Energy, there will be an 80 per cent increase in electricity demand by 2040. With increased demand comes increased risk of blackouts. To meet demand, power suppliers such as the National Grid can either construct five times more transmission towers, or find a material which can carry electricity more efficiently than copper.

“In order to achieve these electrical properties from carbon, an extremely high degree of control over the nanotubes is needed,” says Dr Krzysztof Koziol of the Department of Materials Science & Metallurgy.

The catalytic continuous synthesis process of CNTs was originally developed by Professor Alan Windle from the same department. It uses chemical vapour deposition (CVD) to spin out the nanotubes in long threads, one-tenth of the width of a human hair, from what resembles a high-tech candy floss machine.

The spinning process has been further developed by Professor Windle and Dr Koziol for electrical applications, by achieving very selective synthesis, and producing highly pure material consisting exclusively of single-, double- or multi-wall nanotubes. Recently the process was pushed to the next level, where highly controlled metallic single wall CNTs were produced with a very high level of purity. While most CNTs are grown in ‘forests’ on a substrate with the use of a catalyst, the Cambridge team grows them by injecting the precursor materials (usually methane) and the catalyst in the gas phase into the reactor.

By controlling the diameter of the CNTs, the Cambridge team can indirectly control the chirality. The nano-size catalyst particles, in this case iron, act as a template for growing the nanotubes. The addition of sulphur or selective carbon species results in a cloud of nanotube fibres with enough mechanical integrity to be pulled out of the reactor in continuous strands at a rate of roughly 20 metres per minute.

Once the CNT threads are pulled out of the reactor, they are twisted together to form ultra-light, super-strong wires one millimetre thick, which can be insulated and used as electrical wiring.

“It is reasonably simple for us to make a metre-long wire made of carbon and use it in an electrical system,” says Dr Koziol. “No longer are we talking about millimetre-long, minute samples.”

Dr Koziol’s team has developed an alloy which can solder carbon wires, either to each other or to metal wires, making it possible to incorporate carbon wires into metal-based systems. The solder could also be used for graphene, which is currently joined by clamping sheets together.

Wires made from carbon are 10 times lighter and up to 30 times stronger than copper. The carbon wires are corrosion resistant and can carry a much higher current. Additionally, losses in transmission efficiency with increasing temperature are significantly smaller than in traditional copper wires.

Although copper is recyclable and there are deposits located throughout the world, it is estimated that the global demand for copper will outstrip the amount extractable from the ground by the end of this century, due in large part to the increasing demand for electricity.

The main technical hurdle which must be overcome in order to make carbon wiring a practical reality is improving conductivity. At the moment, the CNTs wires produced by Dr Koziol’s lab are less conductive than copper. Each individual nanotube is just one millimetre long, and at each junction in a long wire, losses in conductivity occur.

Dr Koziol and his collaborators are working to achieve at least comparable levels of conductivity to copper in order to accelerate the commercial development of carbon wiring, by both improving the formation process to make significantly longer nanotubes, and by using chemical methods to enable better connections between individual nanotubes. The team is also working on new methods of power transmission where junction resistance in CNT wires is no longer critical.

In the meantime, there are preparations for a large, multi-industrial project to start at the end of the year which will be an important intermediary step: a hybrid carbon-copper wire in which the carbon is dispersed throughout the copper, making the copper lighter and stronger, while further reducing transmission losses.

﻿Reproduced courtesy of the University of Cambridge﻿