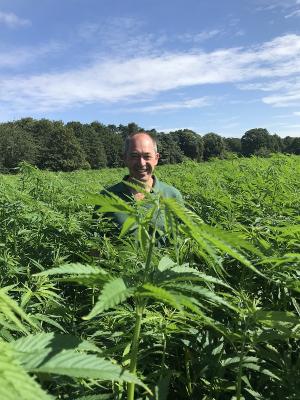 Potential for medical cannabis, industrial hemp and CBD production in the UK discussed ahead of Agri-TechE event next month.

In 2010 UK consumers spent £300m on Cannabidiol (CBD) products, which are promoted widely as a legal means to relieve pain, lower inflammation and decrease anxiety without psychoactive effects. However, all CBD oil sold in the UK is imported, as although UK farmers can grow industrial hemp for its fibres, the most lucrative parts of the plant – the leaves and flowers – must be destroyed. The potential of hemp, a variety of Cannabis sativa L. is to be discussed at the Agri-TechE event ‘Farmer to Pharma’, on 12th May.

The fibres of hemp have long been used for ropes and materials, and now this versatile crop is being exploited for construction materials, animal feed, biofuel and, more recently, as a plant-based alternative plastic. It fits well within a rotation and its cultivation in the UK is increasing.

Dr Belinda Clarke, Director of the membership organisation Agri-TechE, says that the multiple uses of industrial hemp, many of which replace oil-based products, merit investigation and the event will explore the current landscape.

Speaker John Barrett director of Sentry Farms (pictured)  agrees. He says: “Hemp is a crop with a great future – in a market that needs developing,” He recently begun cultivating Cannabis sativa for hemp fibres. Having begun with a 20-hectare plot, he plans to plant a further 200 hectares next year.

“We have been looking for an alternative in order to widen our rotation away from traditional crops,” John explains. “I see hemp as a light land crop; however, we are planning on trying some on heavier soils this year. It has great rooting properties which means it has resilience, but it does not like compaction.”

A hurdle to growing this versatile crop is that it requires a hemp cultivation licence. This is a three-stage process with the Drugs and Firearms Licensing Unit (DFLU) at the Home Office.

This is because the plant Cannabis sativa contains a regulated chemical, THC (Tetra-Hydro-Cannabinol), a psychotropic substance. The sale of THC-containing products is highly restricted and regulated in most EU member states.

Although hemp species of the cannabis plant are very low in THC, studies suggest that levels are raised in the leaves, buds and flowers. So, these parts of the plant must be destroyed where hemp is grown for its fibres.

Robert Jappie, Partner at Ince and a well-respected legal expert specialising in Life Science and Cannabinoid Regulation, will be speaking at the event.  He comments: “Hemp is a really lucrative crop and, by not being able to utilise the entirety of the plant, British farmers are being placed at a disadvantage compared to our EU and US neighbours. In most EU countries it is lawful to extract CBD from the whole hemp plant.

CBD is a legal and effective treatment for pain, inflammation and anxiety, and can be extracted from the leaves of the plant, which could increase the value of the crop for UK farmers.

“I’d like to see this UK restriction on the extraction of CBD be removed. Why must we import CBD from overseas when we are perfectly capable of doing the extraction here?”

A recent breakthrough in this legislative maze is an announcement by the health services of the European Commission (Dec 2020) that CBD can be qualified as food and not as a narcotic, as previously stated.

This announcement has been welcomed by Lorenza Romanese, Managing Director of the European Industrial Hemp Association (EIHA) who is also speaking at the upcoming Agri-TechE event. She says: “In practical terms, this means that hemp operators will finally be able to market their products in a clear legal framework.

“At the moment, the legal uncertainty is preventing the European hemp sector from developing and exploiting the potential benefits of the plant, which is why clear and stable regulation is needed. It will boost investments in R&D and enable the creation of new jobs and market opportunities.”

Robert Jappie agrees that more clarity in regulation is needed: “The ideal situation in the UK would be a separate department, perhaps within DEFRA, managing cannabis cultivation for CBD and Hemp,” he says. Licences are currently handed out by the Drugs and Firearms Licensing Unit, but in over two decades only two full commercial licences have been awarded to UK growers.

A full commercial licence would allow cultivators in the UK to grow and distribute the entirety of the plant, be that for medical or pharmaceutical use. Robert is arguing that there should be a sea change in the way the industry is regulated.

“The first licensee was GW Pharmaceuticals, who obtained their licences around 20 years ago, and the UK is now one of the biggest exporters of medical cannabis because of this company. To give some idea of the revenue available here, GW Pharmaceuticals just got bought by an American company for $7.2bn.”

The uses and market for industrial hemp, the licensing process and the potential for medicinal uses are to be discussed in the Agri-TechE event ‘From Farmer to Pharma – and Beyond – with Medicinal Cannabis and Industrial Hemp’ virtual event 12th May  from 9:50 am - 4:30 pm.