On-farm fertiliser production comes out of the box 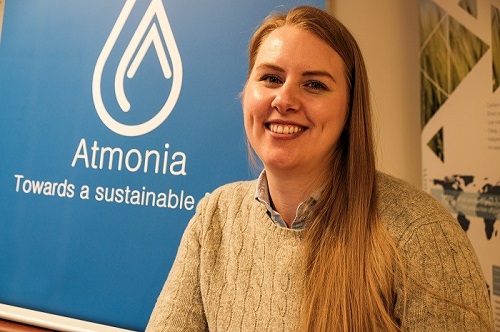 Is it possible to produce nitrogen fertiliser on-farm? Would this reduce the agricultural sector’s greenhouse gas emissions? Early-stage agri-tech companies Atmonia and N2 Applied say yes. They have each developed an alternative approach to generating fertiliser, using renewable energy sources, operating from a shipping container, offering the potential for carbon-neutral production.

Food production accounts for 26% of global greenhouse gas emissions*. Changing the way we produce and use nitrogen fertiliser would make a significant difference to these headline-grabbing figures, and this is to be discussed at the Agri-TechE event “Putting the N in FarmiNg” on 24th March 2021.

“Current ammonia production facilities are huge factories, producing millions of tonnes of ammonia, and double that amount of carbon dioxide.

“Our process takes a completely different approach: it uses an electro-chemical reaction to split nitrogen, which combines with hydrogen from air and water, removing the need for coal or natural gas. It also reduces the energy requirement, which can be sourced from renewables.

“Our facility is designed to produce hundreds of tonnes of ammonia from a unit the size of a shipping container, creating a liquid fertiliser that can be produced close to the point of need.”

Another greenhouse gas, nitrous oxide (N2O), is released when synthetic nitrogen fertilizers are applied to soils. N2O and methane are also produced from the decomposition of animal manures under low oxygen conditions.

N2 Applied is tackling this issue by converting by-products like slurry into a valuable nitrogen enriched organic liquid fertiliser. As a result of the process, the output, known as NEO, is slightly acidic, which increases its stability. This reduces the amount of ammonia released whilst eliminating methane emissions.

“Our technology can cut the carbon footprint of a dairy farm by 27% and produce a valuable organic fertiliser with three times the crop available nitrogen in slurry,” explain Chris Puttick of N2 Applied. 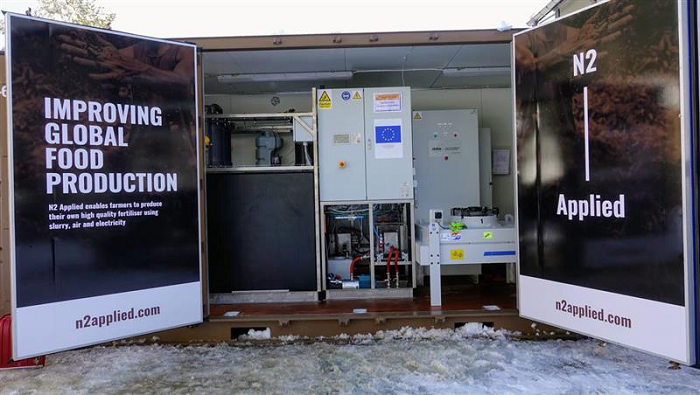 Nitrogen is found in different forms in the environment and total nitrogen (NH4, NO3 and NO2) needs to be considered within a nutrient management plan for the crop. This is particularly important where the farm lies within a nitrate vulnerable zone (NVZ).

Trials of NEO have shown that the nitrogen available to the crop is three times higher than untreated slurry and when applied to a grass sward increased the yield by 41% over two cuts.

Work by Professor Andrew Neal of Rothamsted Research has shown that the way nitrogen is applied to the soil is also important. Results suggest that decades of artificial fertiliser inputs on UK soil without a corresponding return of organic matter have altered the balance of carbon and nitrogen in the soil, changing the way microbes get their energy, which has in turn altered the soil structure.

In the experiment, soil with high nitrogen content but low carbon content had an altered microbial community, which was associated with less pores and connectivity in the soil. As the pores close up, and oxygen in the soil is lost, microbes are forced to turn to nitrogen and sulphur compounds for their energy. This inefficient process drains nutrients from the soil and results in increased emissions of N2O.

Andrew Neal of Rothamsted Research will be joining Guðbjörg Rist of Atmonia and Chris Puttick of N2 Applied to discuss nitrogen production and use at the Agri-TechE event “Putting the N in FarmiNg – SolutioNs for On-Farm Nitrogen ProductioN” on Wednesday 24th March from 2pm - 4pm.

Find out more and register at agri-tech-e.co.uk