Globetrotting duo Jon Wilson and Ross Chilcott are gearing up for the road trip of a lifetime to raise funds for East Anglia’s Children’s Hospices (EACH). 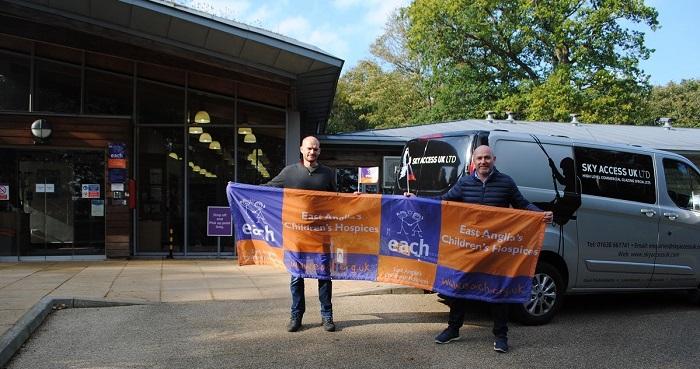 The pair are jetting out to Sri Lanka for an epic 400km challenge and taking part in Ride 4 Charity – an annual expedition that sees fundraising teams navigate the island’s winding roads in three-wheeled tuk tuks.

They will be taking part to raise funds for EACH, which provides care and support for children and young people with life-threatening conditions across Suffolk, Cambridgeshire, Essex and Norfolk.

The duo, directors at Bury St Edmunds-based Sky Access UK, will have the charity’s distinctive branding wrapped around their customised tuk tuk and have set themselves a target of £10,000.

Jon, 41, who lives in Brinkley, Cambridgeshire, said: “What better cause to support, while also going on an amazing adventure?

“A friend’s son suffered from a brain tumour and I went to visit him with my wife at Addenbrooke’s Hospital, in Cambridge.

“I remember walking out and tearing up, feeling emotional about what I’d seen.

“Thankfully, he’s fine now but there were a lot of children there having similar treatment.

“It was hard to see and that’s why it feels great to be supporting a children’s charity now, especially being a father myself.

“Yes, this is an adventure for myself and Ross.

“That’s where the idea initiated but if you’re going to do something like this, you might as well raise funds for a special cause like EACH and hopefully we’ll smash our £10,000 target.

“We’ll certainly be asking for support from all our customers, suppliers and everyone who knows us!”

The unique challenge promises to be an exhilarating experience, taking in all the rich culture, dramatic scenery and spectacular landscapes of Sri Lanka.

They will have the chance take on mountainous hiking trails in the central highlands, snorkel in rich coral reefs, swim through spectacular waterfalls and explore ancient ruins.

“I’m very excited about it and have a bit of an adventurous streak in my blood,” added dad-of-three Jon.

“I feel I need to do things like this every now and it’s exactly the same for Ross.

“We’ve worked together and been friends for years and often talk about trips and challenges like this.

“Obviously there’s been a long break where we haven’t been able to do anything, because of the pandemic, and then this opportunity presented itself.

“Our families and friends have been very supportive. They’re right behind us.

“Our wives know we’ve got adventurous streaks in us and they love the fact we’re doing it for EACH.

“I went to Sri Lanka about 20 years ago and did a lot of touring in the areas we’re going to. I’ll be interested to see how it’s changed, especially given my last visit was before the devastating tsunami (on Boxing Day 2004).

“I imagine a lot of the infrastructure and buildings will be new.”

Jon and 37-year-old dad-of-two Ross, who lives in Newmarket, will have to take a short driving test when they arrive in the Sri Lankan capital, Colombo, on 3rd April 2022.

They will fly back to the UK on 9th April.

To support Jon and Ross and make a donation to EACH, head to www.justgiving.com/fundraising/skyaccessuk