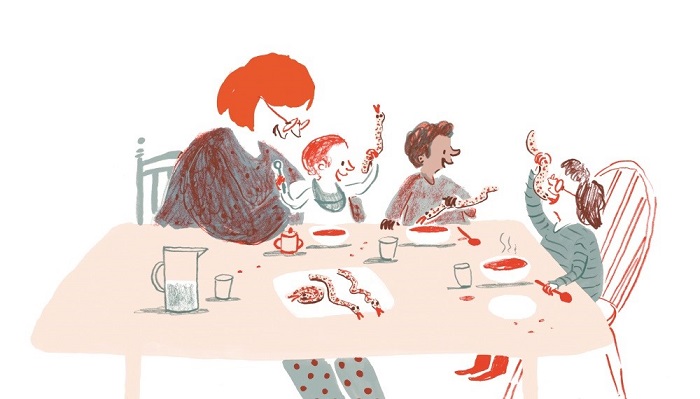 Anglia Ruskin University (ARU) graduate Rachel Stubbs is currently cooking up a treat, after teaming up with Great British Bake Off winner David Atherton to produce a new book for children.

Rachel, an award-winning illustrator, received a call from David not long after the “Nomad Baker” won the 10th series of The Great British Bake Off last autumn.

And now Rachel, who graduated from the MA course in Children’s Book Illustration at Anglia Ruskin University (ARU) in 2017, is putting the final touches to My First Cook Book, which is set to be published this summer.

Among the recipes Rachel will be bringing to life through her artwork are “Veggie Hotdogs”, “Piggy Bread Buns” and “Crunchy Hedgehogs”.

Rachel said: "Soon after David won The Great British Bake Off in October, he asked if I would like to collaborate on something for children together. We then pitched our ideas to Walker Books and it all spiralled from there.

“David and I have known each other for years, so getting to work on this project together has been a bit of a dream! This book has been a real collaboration between us and Walker Books, who have brought a huge amount of enthusiasm and ideas of their own to it. For a children’s cookery book, it is unusual because it relies solely on illustrations rather than photography.

“There are illustrations of the ingredients, step-by-step drawings of how to make each dish and also character illustrations of different families cooking throughout. The recipes themselves are fun and imaginative, and have been a joy to bring to life. I’ve been given a lot of freedom as far as the look of the book goes, and being on similar page to David visually has definitely helped in this process.

“Since the MA at Anglia Ruskin University, I’ve enjoyed using a limited palette which David was really keen for me to keep for the cookbook. However, we soon realised this might be too restricting for food illustrations! So it has been a good challenge to try and introduce other colours whilst keeping the overall feel as harmonious as possible."

In addition to working on My First Cook Book, Rachel's debut picturebook My Red Hat, also published by Walker Books, is due out in May this year.

Image: Illustration from the recipe for 'snakey breadsticks'