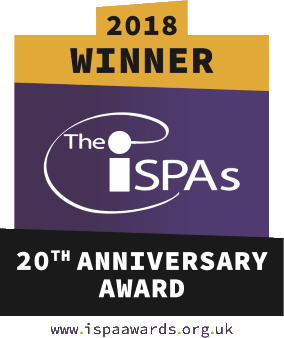 The Internet Watch Foundation (IWF) has won the 20th Anniversary Award 2018 in the UK ISP Internet Industry Awards for its groundbreaking work removing child sexual abuse imagery from the internet.

The UK Internet Service Providers Association (ISPA), which hosted the awards ceremony on Thursday 12th July, chose the IWF as its worthy winner of the prestigious prize, which is one of three new awards added for 2018.

On its 20th anniversary in 2016, the IWF proudly celebrated having reduced the UK’s hosting of child sexual abuse imagery from 18% in 1996, to less than 1% today. This was done through its fundamental services to the internet industry, including its URL List and Keywords List.

The UK Safer Internet Centre, of which the IWF is a partner with Childnet International and SWGfL (South West Grid for Learning), was also selected as a finalist in the Best Project or Partnership category, which is another new award for 2018.

Susie Hargreaves OBE, IWF CEO and UKSIC Director, said: “I’m absolutely thrilled to hear that the IWF has won this ISPA Award. We know that our Hotline Analysts are world class and have worked incredibly hard over the past 20 years.

"When we started out, 18% of online child sexual abuse was hosted in the UK. Today that figure is less than 1%.

"To have this success recognised by the internet industry is something which means a great deal to us. Thank you."

The finalists for 2018 were scrutinised by an “independent panel of industry experts,” while broadband ISPs, website hosts and VoIP providers underwent technical testing.

The winners were announced during the awards ceremony at the Midland Hotel in Manchester.

To read more about the ISPA Awards, go to www.ispa.org.uk/ispa-awards

*20th Anniversary Award 2018 is a trade mark of the Internet Services Providers’ Association, used under licence.