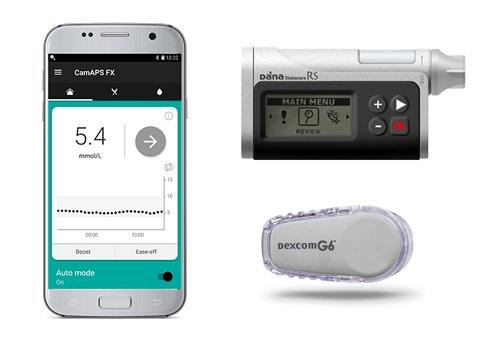 An artificial pancreas developed by Cambridge researchers is helping protect very young children with type 1 diabetes at a particularly vulnerable time of their lives.

Writing in the New England Journal of Medicine, researchers compared the performance of the artificial pancreas, which uses an algorithm to determine the amount of insulin administered by a device worn by the child, against ‘sensor-augmented pump therapy’. They found that it is both safe to use and more effective at managing their blood sugar levels than current technology.

Management of type 1 diabetes is challenging in very young children, because of a number of factors including the high variability in levels of insulin required and in how individual children respond to treatment, and their unpredictable eating and activity patterns. Children are particularly at risk of dangerously low blood sugar levels (hypoglycaemia) and high blood sugar levels (hyperglycaemia). Previous studies have linked prolonged hyperglycaemia in children with type 1 diabetes with lower IQ scores and slower brain growth.

To manage children’s glucose levels, doctors increasingly turn to devices that continuously monitor glucose levels and deliver insulin via a pump, which administers insulin through a cannula inserted into the skin. These devices have proved successful to an extent in older children, but not in very young children.

Current technology – sensor-augmented pump therapy – requires parents to review their child’s glucose levels using a monitor and then manually adjust the amount of insulin administered by the pump.

Professor Roman Hovorka from the Wellcome-MRC Institute of Metabolic Science at the University of Cambridge has developed an app – CamAPS FX – which, combined with a glucose monitor and insulin pump, acts as an artificial pancreas, automatically adjusting the amount of insulin it delivers based on predicted or real-time glucose levels. It is a ‘hybrid closed loop system’, meaning that the child’s carer will have to administer insulin at mealtimes, but at all other times the algorithm works by itself. There are no commercially-available versions of fully closed loop systems yet.

Professor Hovorka explained: “CamAPS FX makes predictions about what it thinks is likely to happen next based on past experience. It learns how much insulin the child needs per day and how this changes at different times of the day. It then uses this to adjust insulin levels to help achieve ideal blood sugar levels. Other than at mealtimes, it is fully automated, so parents do not need to continually monitor their child’s blood sugar levels.”

Working across seven centres in the UK and Europe, Professor Hovorka and an international team of researchers recruited 74 children with type 1 diabetes, aged one to seven years, to take part in their trial. The trial compared the safety and efficacy of hybrid closed-loop therapy with sensor-augmented pump therapy. All children used the CamAPS FX hybrid closed-loop system for 16 weeks, and then used the control treatment (sensor-augmented pump therapy) for 16 weeks.