By analysing immune responses across people of different ages after seasonal influenza vaccination, immunologists at the Babraham Institute have shown that a particular type of white blood cell, circulating T follicular helper cells, is linked with good influenza antibody responses in younger people. But that in people over 65, the formation of these cells upon vaccination is reduced compared to younger individuals. 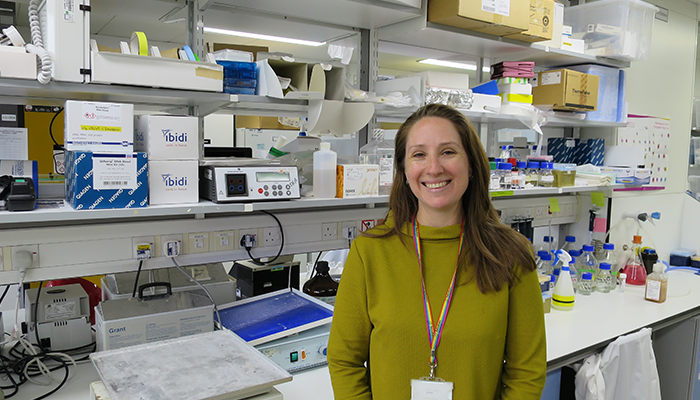 We are currently witnessing the ability of vaccination programmes to limit the burden of infectious disease on both individuals and society. Despite their success, most vaccines are not completely effective, and efficacy varies significantly due to individual immune response but also age and other factors. Understanding the cellular and molecular interactions that lead to a strong immune response is key to improving vaccines.

Research published this week in eLife by Dr Michelle Linterman (pictured) and her team assessed multiple aspects of the vaccination response following a 'flu vaccine and identified age-related differences where the vaccine stimulated pro-inflammatory signalling which affects cells key to developing a strong immune response. This study suggests that interventions to dampen inflammation at the time of vaccination may boost immune responses in older people.

As we get older, our immune response to vaccination becomes weaker, and researchers are still trying to understand why. Dr Linterman and her lab looked for an explanation by comparing over 50 different immune variables in individuals before and after vaccination, including the level of neutralising antibodies raised to the protein the ‘flu virus uses to enter cells (haemagglutinin), cell signalling molecules and B and T cell responses. The researchers were able to track the immune cells that responded to the vaccination to be certain that the changes they were seeing were a result of the vaccine.

The team found that the number of circulating T follicular helper cells (cTfh) that specifically recognise the influenza protein haemagglutinin were the best indicator for a strong immune response and that these cells differentiate from pre-existing memory cells, but that in older people this differentiation process is reduced.

Looking for an explanation for impaired cTfh cell differentiation in older people, the researchers investigated the transcriptome to detect differences in the genes expressed in the vaccine-specific cTfh cells from younger and older individuals. They found that cells from older individuals failed to acquire the full gene signature seen in Tfh cells from younger people. Moreover, they detected the activation of pro-inflammatory signalling pathways in cTfh cells from older people in response to vaccination, which negatively impacts an optimal vaccine response.

Dr Linterman said: “Understanding the molecular events behind our body's response to vaccination shows us what is happening when the immune response isn't as strong as it could be. Our research provides a proof of concept that enhanced inflammation is a feature of the vaccination response in older people and that this limits the formation of T follicular helper cells, which are in turn essential for supporting good antibody production. This suggests that strategies that temporarily dampen inflammation at the time of vaccination may be a viable strategy to boost optimal antibody generation upon immunisation of older people.”