The head of a charity retail operation says volunteer support is pivotal to the organisation’s long-term sustainability. 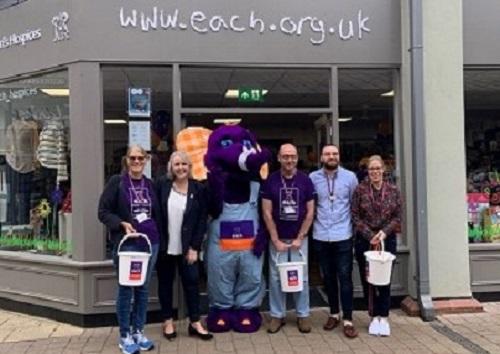 Ian Nicolson is Director of Retail and Trading at East Anglia’s Children’s Hospices (EACH), which has 44 shops across Suffolk, Norfolk, Cambridgeshire and Essex.

The charity supports families and cares for children and young people with life-threatening conditions.

It relies on voluntary donations for the majority of its income and needs to raise £5.4 million from its shops during 2022.

Ian says that will only be possible with the help and support of volunteers and was speaking during the launch of EACH’s We Need You campaign – a recruitment drive that starts today and runs until 28th January.

“In terms of volunteer numbers, we’re still desperately trying to recover from the effects of the pandemic,” he said.

“We’re down 21% compared to the figures pre-COVID and that’s some improvement, because at one point it was 50%.

“However, in real numbers, that equates to just short of 200 volunteers and, as a result, our shops remain under heavy pressure because donations are up more than 30% on pre-COVID levels.

“It’s a perfect storm between those levels being up and volunteer numbers being down.

“Sales are booming, which is fantastic, but it’s creating enormous pressure in our shops because we don’t have the resources to process everything.

“As a result, we’re spending a lot more on staff primarily through paying for more sales assistants and relief managers.”

Ian hopes the We Need You campaign proves as successful as in 2021, when nearly 150 people stepped forward to join the EACH cause.

He says volunteers are worth their weight in gold and make the operation viable.

“Volunteering is rewarding on so many levels,” he said.

“You get to work with a great bunch of people, be part of a loved charity shop and make a huge difference to the lives of the children we care for by helping the retail team raise such a significant amount of money for the charity.

“Without volunteers charity retail isn’t a viable operation. It’s as simple as that and why we’re so hopeful this campaign strikes a chord with people and encourages them to make contact.”

There are a host of roles available and the charity is keen to hear from anyone who has time to spare, even if just a couple of hours a week.