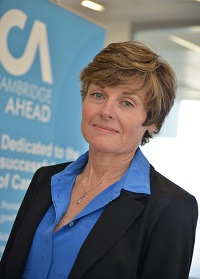 Cambridge Ahead, the business and academic member organisation, has welcomed five new members committed to helping to shape the long-term sustainable growth of the Cambridge economy and the wider region.

The new members; The Mick George Group, The Jockey Club, JLL, COEL and U+I represent the increasingly broad footprint of the Cambridge economy in the region’s market towns and internationally.

·       The Mick George Group was established in Cambridgeshire almost 40 years ago and has grown to become one of the leading suppliers to the construction industry. Operating from thirty-nine separate locations in the region including its head office in Huntingdon, the Mick George Group is playing a major part in creating the infrastructure that will supplement the anticipated future growth of Cambridgeshire.

·       The Jockey Club is the largest commercial group in Britain’s second-biggest spectator sport, operating 15 racecourses nationwide, including Newmarket Racecourse and Huntingdon Racecourse.  In addition, it owns and manages the 2,500 acres of racehorse training grounds, The National Stud and The Jockey Club Rooms in Newmarket and plays an important role in the global sport and industry of horseracing.

·       JLL is a world leader in real estate services with an annual revenue of $16.3 billion, operations in over 80 countries and a commitment to net zero carbon in its UK workplaces by 2030 for a sustainable future.

·       COEL has operated within the Cambridge region for over 30 years and specialises in office and laboratory refurbishment including fit-out, for both landlords and tenants.

·       U+I is focused on regenerating overlooked and underestimated urban places and has worked in Cambridgeshire for over 20 years, bringing forward schemes in Cambourne Business Park, Cambridge Science Park and on Cambridge Northern Fringe East.

Jane Paterson-Todd, CEO, Cambridge Ahead (pictured), commented: “I am delighted to welcome our five new members. The Mick George Group and The Jockey Club reflect and support the work we have been doing in the wider region, particularly around the connectivity of market towns and how transport issues are affecting towns’ own growth and ambitions, in addition to digital infrastructure projects in the greater Cambridgeshire and Peterborough area.

“The active involvement of global firm JLL with its focus on creating sustainable spaces, buildings and cities, and more locally COEL and U+I, which play a huge part in shaping the ‘now’ and the future of our region as we consider our increasing reach and impact, will add significant expertise and knowledge to our work in these areas.”