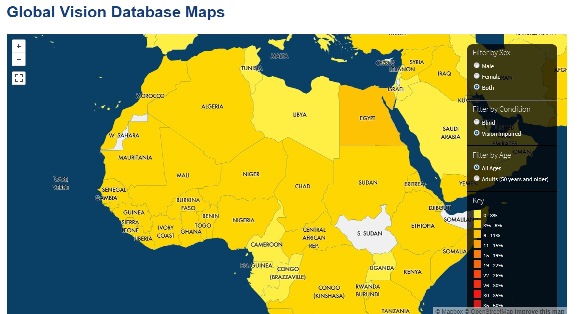 Online maps to allow users to search causes of sight loss all over the world for the first time have been published by a research group led by Professor Rupert Bourne of Anglia Ruskin University.

The maps - located at www.iapb.org/maps - allow data on partial and full sight loss to be filtered by gender and by country and region. They also display trends over time between 1990 and 2010.

The Global Vision Database (GVD) has been created and maintained by the Vision Loss Expert Group, an international group of 79 ophthalmologists and optometrists with an interest in the epidemiology of eye disease. Since 2008, the group have collected data from more than 250 population-based eye surveys, conducted between 1980 and 2012 by reviewing vision-related references in medical literature.

The GVD is aimed at providing vital information for public health officials, researchers, and groups such as the World Health Organisation to aid the understanding of the burden of eye disease.

Professor Bourne, of Anglia Ruskin’s Vision and Eye Research Unit, said: “Blindness and visual impairment is a major public health issue and estimates show that four out of five cases can be avoided.

“There is still much work to do to try and prevent sight loss all over the world. These maps allow easy access to the Global Vision Database, allowing people to view trends and prevalence of sight loss in different countries and regions. Further maps on causes of vision loss are in development. We hope they will prove invaluable to further developments in preventing blindness.”

The maps were officially launched in Mexico City as part of the celebrations for World Sight Day, which this year focused on eradicating ‘avoidable blindness’.