In response to the COVID-19 pandemic, a team at the University of Cambridge has designed an open-source ventilator in partnership with local clinicians, engineers and manufacturers across Africa that is focused to address the specific needs for treating COVID-19 patients and is a fully functioning system for use after the pandemic. 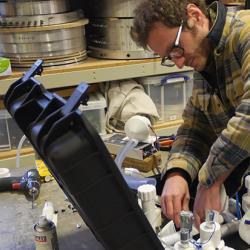 Built primarily for use in low- and middle-income countries, the OVSI ventilator can be cheaply and quickly manufactured from readily available components. Current ventilators are expensive and difficult to fix, but an open-source design will allow users to adapt and fix the ventilators according to their needs and, by using readily available components, the machines can be built quickly across Africa in large numbers. The cost per device is estimated to be around one-tenth of currently available commercial systems.

The first ventilators will be delivered in May by a team of South Africa-based companies led by Defy, a leading southern African manufacturer of domestic appliances, and Denel, a major state-owned company.

Recent tentative estimates published by the WHO have suggested that there could be as many as 10 million cases of COVID-19 in Africa within three to six months, resulting in anywhere between 300,000 and 3.3 million deaths. There are 10 countries in Africa that do not have any ventilators at all and according to the WHO, it is estimated that there are fewer than 2,000 working ventilators across 41 countries in Africa.

“Fulfilling the unique requirements of local clinicians was key to this project,” said Professor Axel Zeitler from the Department of Chemical Engineering and Biotechnology, and OVSI team lead. “Clinicians told us the ventilator needed to cover the wide spectrum of patient ventilation requirements, and therefore work in three modes – non-invasive, mandatory or patient-triggered ventilation.

“We also know that oxygen availability varies within countries, hospitals and wards. The system must use the smallest amount of oxygen possible, but include the potential to add an oxygen concentrator.”

The Open Ventilator System Initiative is a consortium of academics, engineers, intensive care medics, innovators and industry partners across the UK and Africa. Formed in March this year, the initiative has grown quickly from an initial idea at the University of Cambridge to a team of 60 individuals contributing remotely.

The team is being advised by a panel of clinical experts including physicians in Uganda, Kenya, the DRC, South Africa and the UK. The clinical partnerships were established with the support of the Cambridge-Africa programme and Cambridge Global Health Partnerships. The ventilator was designed and built by a team based at the University of Cambridge’s Whittle Laboratory.