Over 100,000 views of Cambridge Festival events

The inaugural Cambridge Festival, which concluded on Sunday (4th April), has been hailed a massive success following 10 momentous days of over 350 free, online events and well over 100,000 views from 173 countries during the Festival period. 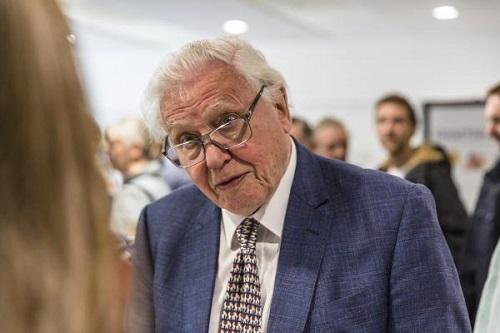 The final day ended on a high with Sir David Attenborough (pictured) discussing his hopes for the future of our planet with broadcaster Liz Bonnin during the Earth Optimism series of events. More than 3,000 people watched it live (many more have watched it on catch up since). There were over 2,500 comments from people across the world, including Australia, Canada, Thailand, Greece, Turkey, America and more, as they chatted with each other on the live chat during the hour-long YouTube premiere. There was a poignant moment during their talk when Liz Bonnin stated that she had had a “lightbulb moment”. Liz went on to explain that she had suddenly realised why so many loved Sir David; most people alive today had grown up listening and watching his programmes and had therefore “imprinted” on him.

Unsurprisingly, the Festival was marked by the considerable interest from viewers in those events showcasing cutting-edge research into many of the issues concerning all of us, including talks on young people’s mental health, COVID, climate change, democracy, legacies of enslavement, artificial intelligence, human rights, and Black Lives Matter. Of these events, one of the most watched to date (over 6,000 views) is the discussion between Professor Sir David Spiegelhalter and Tim Harford about what exactly all the numbers brought to us through the overwhelming daily reports related to COVID-19 mean.

Other highlights include a live talk and Q&A with Professor Dame Jane Francis, Director of British Antarctic Survey, on the first day of the Festival, which saw people tuning in to watch from a staggering 20 different countries. While Helen Scales’ event, The Brilliant Abyss, offered a stunning look into the deep sea and ended with Helen’s emotive message about deep sea mining: “There are places on this planet that are too important and too special… We don’t have to keep telling the same story of exploitation and depletion.”

On a lighter note, other popular events included the Museum of Zoology’s riotous Battle of the Beasts, and the engaging exposé regarding the influence on British culture (including the setting of Greenwich Mean Time) of the mistresses of Charles II. Also noteworthy was the fascinating talk about poo – which is, apparently, the daily activity that makes people more human; because we excrete bacterial cells when we poo, we become more human as proportionally there are more human cells in us afterward.

The Festival Zine, which is chock-full of activities for children and their adults, continues to prove popular with families. Over 2,000 printed copies have been dispatched so far and another 2,000 downloaded from the Festival website. The activities are not event specific and can be downloaded here at any time for children and families to enjoy: https://www.festival.cam.ac.uk/festival-zine In addition, all the science and medical masterclasses for 6th Form students were completely full and there were people still wanting to join right up to the last minute before each class started.

David Cain, one of the Festival Managers, said: “People have really responded to the Festival being digital this year and the advantages that brings in terms of watching on demand and from a location that suits.

“Over 1,000 people were involved in putting on the Festival and we are so thankful to them all; the speakers, coordinators, University Departments, research institutes, museums and many more all fully embraced the online element this year. What is particularly astounding is that for many it was their first time of working in this way.

“We also know our social media engagement has been incredible with interactions on a scale never seen before. For example, from Festival launch in late January to date we have seen over 1.5 million impressions across our social media channels, and our total net audience growth on twitter, Facebook and Instagram is almost 7,000%.”

“The success of the Festival is also due to the thousands and thousands of festival goers who viewed or took part in these online events – testament to the immense interest people have in the world around them. We’re now looking forward to the 2022 Festival, which, given all the positive feedback, we are planning as a mixture of both online and in person events.”

Many events are still available to watch via the various YouTube channels:

Further information about the Festival can be found at: www.festival.cam.ac.uk