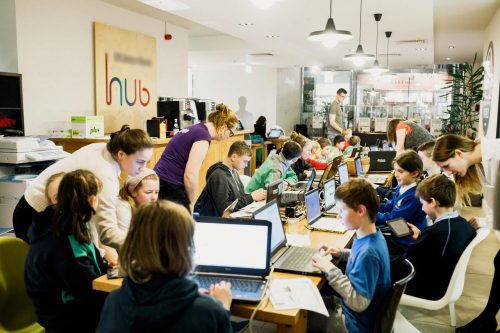 The Raspberry Pi Foundation is joining forces with the CoderDojo Foundation, in a merger that will give many more young people all over the world new opportunities to learn how to be creative with technology.

CoderDojo is a global network of coding clubs for kids from seven to 17. The first CoderDojo took place in July 2011 when James Whelton and Bill Liao decided to share their passion for computing by setting up a club at the National Software Centre in Cork. The idea was simple: provide a safe and social place for young people to acquire programming skills, learning from each other and supported by mentors.

Since then, James and Bill have helped turn that idea into a movement that reaches across the whole world, with over 1,250 CoderDojos in 69 countries, regularly attended by over 35,000 young Ninjas.

Philip Colligan, CEO of the Raspberry Pi Foundation, writes in his latest blog:

Raspberry Pi and CoderDojo have each accomplished amazing things over the last six years. Now, we see an opportunity to do even more by joining forces. Bringing together Raspberry Pi, Code Club, and CoderDojo will create the largest global effort to get young people involved in computing and digital making. We have set ourselves an ambitious goal: to quadruple the number of CoderDojos worldwide, to 5,000, by the end of 2020.

The enormous impact that CoderDojo has had so far is down to the CoderDojo Foundation team, and to the community of volunteers, businesses, and foundations who have contributed expertise, time, venues, and financial resources. We want to deepen those relationships and grow that community as we bring CoderDojo to more young people in future.

The CoderDojo Foundation will continue as an independent charity, based in Ireland. Nothing about CoderDojo’s brand or ethos is changing as a result of this merger. CoderDojos will continue to be platform-neutral, using whatever kit they need to help young people learn.

How will this work in practice? The two organisations will work together to advance our shared goals, using our respective assets and capabilities to get many more adults and young people involved in the CoderDojo movement. The Raspberry Pi Foundation will also provide practical, financial, and back-office support to the CoderDojo Foundation.

Last June, I attended the CoderDojo Coolest Projects event in Dublin, and was blown away by the amazing projects made by CoderDojo Ninjas from all over the world. From eight-year-olds who had written their first programs in Scratch to the teenagers who built a Raspberry Pi-powered hovercraft, it was clear that CoderDojo is already making a huge difference.

I am thrilled that we’re going to be working closely with the brilliant CoderDojo team, and I can’t wait to visit Coolest Projects again next month to meet all of the Ninjas and mentors who make CoderDojo possible.

If you want to find out more about CoderDojo and how you can get involved in helping the movement grow, go here.