With 7,306 consecutive days of non-stop play, RuneScape becomes one of the world’s longest-running online games and announces a year of epic 20th anniversary-themed content. 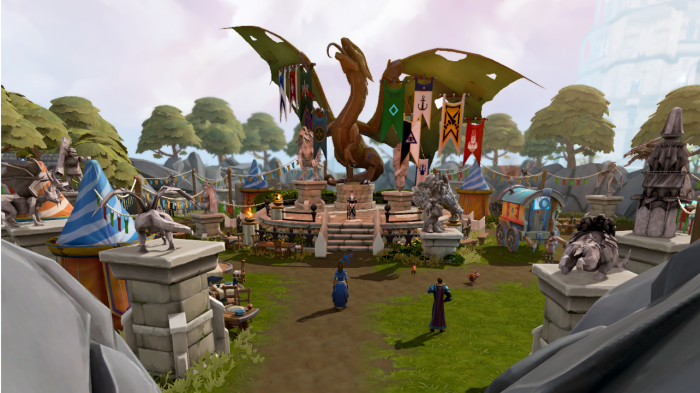 Two decades on, RuneScape has become one of the world’s longest-running online games, having been played non-stop for 7,306 consecutive days, welcomed almost 300million player accounts, and is at peak popularity: in 2020 the RuneScape games hit a new record-high of subscribers with more than 1.2million members joining the further millions of players who enjoy RuneScape for free.

It all kicks off with The Grand Party, an anniversary event in RuneScape that brings players together with some of the game’s most recognisable characters. The next 12 months will welcome a whole host of celebratory in-game content, including a multi-part anniversary questline that takes players deep into RuneScape’s past, present, and future. Plus, adventurers can enjoy a year-long epic story arc in which the Elder Gods, the beings who forged Gielinor, rise once again.

Old School RuneScape also joins in the revelry this week with the launch of its first anniversary event, which has players adventuring alongside the Green Gnome Child to do battle with demons and dragons of yore. Currently riding high having recently seen its highest-ever number of concurrent users top more than 173,000 players, 2021 will also be a significant year for Old School RuneScape with its arrival on Steam, new content including Clans and Group Ironman, and further anniversary-related game content across the year.

Delivering the opportunity to play across multiple platforms, RuneScape will also bring its open and ever-evolving world to mobile and tablet in this anniversary year with full launches for both iOS and Android. And for those who want to read the story of RuneScape’s 20-year evolution, ‘RuneScape: The First 20 Years – An Illustrated History’ will be published as an official companion book by Dark Horse Books.

Phil Mansell, Jagex CEO, said: “20 years of RuneScape is a massive milestone for Jagex and the games, and I thank our players for being on this incredible journey with us, especially when the games are enjoying their best years ever – so far! RuneScape has come a long way since 2001 when it was launched by a small team of visionary game developers. It was innovative and ambitious right from the start in providing players with a free, always-on, role-playing game with a unique personality.

“Today the RuneScape games are a true Great British success story that has gone global. It has thrived for 20 years by embracing its heritage while also evolving with more than 1,000 game and content updates, making it a truly living game. As we continue to make the RuneScape universe more accessible to more players all over the world, we’ll celebrate throughout 2021 with one of the most content-rich years for the games ever and here’s to the next 20 years!”

While RuneScape has already received more than 1,000 game and content updates in its two decades, 2021 is packed with 20th anniversary excitement and much more for both RuneScape and Old School RuneScape.

Join the celebrations at The Grand Party in RuneScape today at https://www.runescape.com

About RuneScape: Now 20 years in the making and acclaimed by PC Gamer as “one of the most endearing and unique MMOs available”, RuneScape is an ever-expanding, living game that’s bursting with activity and life. Set in a medieval fantasy land, begin by creating a character and then embark on epic journeys through a vast sandbox world that’s full of gods, warring races, unexplored dungeons, and glittering riches. Propelled by the game’s narrative, choose your own path through enthralling quests, and progress through 28 diverse skills to shape a single character in a classless world. RuneScape Mobile Early Access is now available for RuneScape members on Android, featuring cross-platform play between mobile and desktop editions, enabling players to seamlessly jump between devices and take their adventure anywhere. In RuneScape, you get to be the hero you always wanted to be and, with new content added almost every week, there’s always a new and adventurous experience to look forward to. Become the hero you were born to be at www.runescape.com

About Old School RuneScape: Launched on desktop in 2013, and now also on mobile devices, Old School RuneScape is the industry-leading collaboration between players and developers. Embracing its nostalgic heritage, hundreds of thousands of active players control the direction of the game with an in-game polling system. Featuring adventures for solo play through to 100-player strong raids, Old School RuneScape caters for every brave adventurer. Since 2016, Old School RuneScape has established itself as a competitive game with the seasonal free-for-all Deadman Tournaments, where winners receive huge cash prizes and membership. Play now at http://oldschool.runescape.com

About Jagex: A leader in creating deep and engaging live games on PC and mobile, Jagex’s flagship MMORPG, RuneScape, has welcomed almost 300million player accounts to its world and is a $1bn lifetime revenue franchise. Today the RuneScape franchise exists beyond running games in live operations; our titles are living games that connect and inspire millions of players, with content and experiences both inside and outside of inexhaustible game worlds. Both RuneScape and Old School RuneScape, on PC and mobile, offer ever-evolving, highly active worlds and our community-focussed development ethos empowers players to have a real say in how each game is shaped. Now we’re expanding and extending our portfolio with fresh franchise titles and new IP to bring life to the living games of the future. Jagex employs more than 440 people at its Cambridge headquarters.