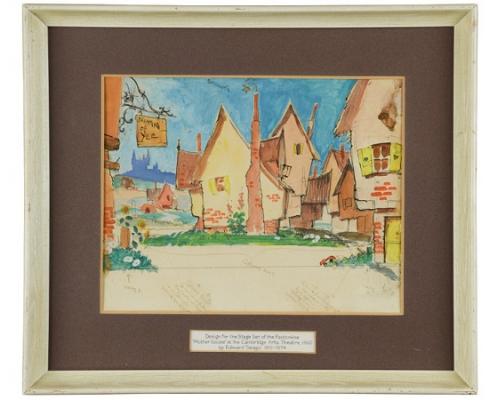 Three set designs for Cambridge Arts Theatre by celebrated East Anglian artist, Edward Seago, will go under the hammer at Cheffins at the Art & Design sale on Thursday 27th May.

The watercolours were produced by Seago for the production of Mother Goose, staged at the Cambridge Arts Theatre in December 1950 and January 1951. The pantomime was produced by and starred Cyril Fletcher and was written and devised by his wife, Betty Astell. Seago is known to have produced 16 watercolours for the set design in total, three of which will be available at the auction at Cheffins. These were the first professional set designs undertaken by the artist, who then went on to design sets for several more pantomimes by Fletcher and Astell, as well as the 1958 production of The Brass Butterfly by William Golding.

The three watercolours feature townscape and castle scenes and the finale of the Mother Goose production. They are estimated to sell for between £400 - £800 apiece. They have been consigned by a private collector who bought them from the daughter of Betty Astell and are being offered to the market for the first time.

Brett Tryner, Director, Cheffins, says: “Today, Norwich born artist, Edward Seago, is mainly linked with his paintings of East Anglian landscapes, and these set designs provide a completely different insight to another area of Seago’s life and work. It is known that at 18, Seago left his family home to travel throughout Europe and the UK with the circus, all the while producing sketches and paintings of encampments, performers, and audiences. By 1950, Seago was established as one of Britain’s foremost landscape painters, with a series of Royal patrons, therefore it seems surprising that Seago would choose to paint the scenery for a local pantomime at this point of his career. Cyril Fletcher and Betty Astell had been friends with Seago since 1942, and had managed to convince him to paint commercially, undertaking the commission to create the set design for Mother Goose. The watercolours, some of which are available at this sale, were hugely popular with the local press declaring it a ‘work of art.’ As the majority of Seago’s works sell for way into the thousands, these watercolours represent an opportunity for a collector to purchase works by one of England’s most celebrated painters, at a much more affordable price. These paintings are bound to be of local interest, and we expect they will be hugely sought-after at the sale.”

Also from the same collection is a portrait of Mrs Betty Fletcher, nee Astell, also by Seago. Mrs Astell was an actress who was mainly known for her comedy and pantomime productions. She was one of the first people to have performed on television, appearing in more than 30 film and television productions during her career throughout the 1930s and 1940s, including Strictly Illegal (1935), Magpie Masquerade (1949) and A Piece of Cake (1948). The painting has an estimate of £7,000 - £10,000.

Also within the sale, but from a different private collection, is a scene of A London Square by Edward Seago, which has an estimate of £7,000 - £10,000. In addition, there is a collection of three loose set designs, one dated 1946, which originally from the collection of John Seago, the artist’s brother, and are offered as one lot with an estimate of £500 - £700.

The catalogue can be viewed here

Image: One of the sets designed by Seago for the production of Mother Goose