Last week Marshall Centre was joined by Toby McCann from Thales Aerospace who led an informative HiveMind discussion on the innovations happening in aviation to move towards greater sustainability. 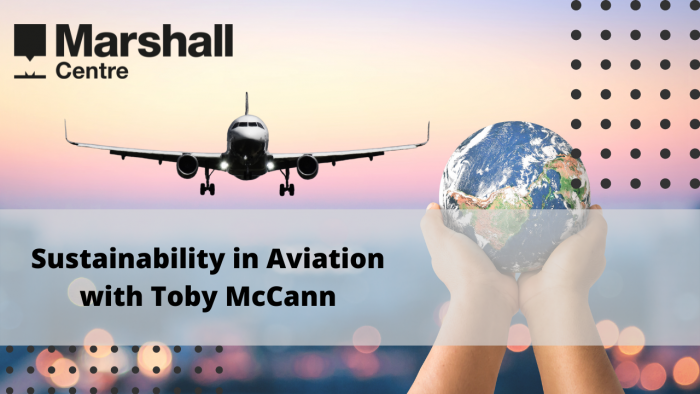 Toby started his career in the Royal Navy as an aircraft engineer and then was selected as aircrew. He was a mission commander, which in the Navy they call an observer, so his job title become a Maintenance Test Observer working mainly with weapon systems. Over the years, Toby has worked on many ships and aircraft in high profile roles, which has given him a great cross-section of experience and led to his interest in being part of the cutting edge to drive sustainability in aviation.

Why is aviation in the spotlight?

There was a lot of discussion at COP 26 about aviation and how we move towards greater sustainability as 2.5% of global CO2 emissions (Pre COVID) come from aviation. Although this might not seem like much, this statistic is only looking at CO2 and not considering the contrails (the thin white lines in the sky left by aircraft) and nitrogen oxide, which also contributes towards global warming. Most of the damage is caused by long-haul or super long-haul flights so that is where we should be focusing our efforts to get maximum improvement.

The race to net-zero

If we are to meet our goal of reaching net-zero carbon by 2050, then we really must think of this as a race and that the rate of decarbonisation is important. Aviation cannot be viewed in isolation as there could be negative consequences that happen because of sustainability initiatives, which would cancel out any good that was achieved, rendering the whole activity pointless. So, the energy transition is about how efficiently we move towards using renewable energy sources. Globally we waste around 70% of all our energy and in the aviation sector that number rises to around 80% so the key to solving this puzzle is really around efficiency and reducing the amount of energy that is wasted because then we will need to use far less renewable energy.

Electrification is the most efficient form of energy we have available to us. It is 70% – 80% efficient which means from a wing turbine through the distribution network, through your battery, out of the battery and into the motor again, you will not lose more than 30% of that energy, which is very hard to beat with any other system. Although not widely used in aviation yet, we know that electric motors are highly reliable, and they have very low operating costs. Several aviation companies are looking to develop electric-powered small aircraft with 6 – 19 seats. The challenge with scaling this technology to the bigger jets is the weight of the batteries. The batteries also must be packaged in a safe way to ensure they do not arch or overheat and cause a fire. Operators must then consider how the batteries will be charged and there is currently no data about how the batteries will degrade over time in an aviation setting. So, for now, this technology is likely only going to be useful for small aircraft that travel short distances and not larger aircraft that complete long-haul flights.

Sustainable Aviation fuels are known as drop-in fuels as they can be mixed with regular jet fuel without needing to drain the tanks. Two ways of doing this are with e-fuel or biofuel. E-fuel is made by using large amounts of electricity to convert waste carbon dioxide into fuel. It isn’t very efficient, but it is a fuel that you can measure the exact carbon impact that it has so it is very green as a fuel source but also very expensive. Then we have biofuel that uses nature to do the heavy lifting as they use plants to suck the carbon dioxide out of the air and then use biomass, feedstock, or waste oils to turn into fuel. Toby said that biofuel was probably the best way forward when thinking about sustainability in aviation, however, it is important to understand where the biomass and waste products are sourced from, for example, palm oil production is responsible for mass deforestation. So, the production of biofuel must become more strictly regulated to ensure we do not do more damage than good by producing it unethically.

Hydrogen has some great advantages as it is the lightest gas and when you burn it, the only byproduct is water. There are however numerous disadvantages to hydrogen, which can be overcome with enough engineering, but this must be factored into any discussions about hydrogen being the only solution to sustainable aviation. Hydrogen takes up a lot of volume; four to five times the volume of jet fuel even when it is compressed down to a few thousand bar. The more volume the aircraft is carrying, the more drag is created, and the more power is needed to keep the aircraft in the sky. So, the benefits of hydrogen-fuelled aircraft decrease as the size of the aircraft increases. Hydrogen can be burned as a liquid fuel in a modified gas turbine engine, but to store and move hydrogen in liquid form, it needs to be kept at -260 degrees C, which is extremely complicated and requires a lot of energy to keep the hydrogen at that temperature. Although Hydrogen is a complex fuel to work with, many engineers around the world are designing technologies to overcome those issues and it might become a viable solution for the future.

There are hundreds of aviation start-ups who are designing e-VTOL aircraft and although this is not solving any immediate sustainability issues as they are designed to take passengers over very short distances, which could easily be completed in a train or a car, which all should be electric by the time these aircraft are rolled out in scale. Plus, if we look at the area of aviation that we must make the biggest impact it is in long haul flight. However, where these e-VTOL companies are leading the way is in developing technologies that might be used on larger aircraft of the future.