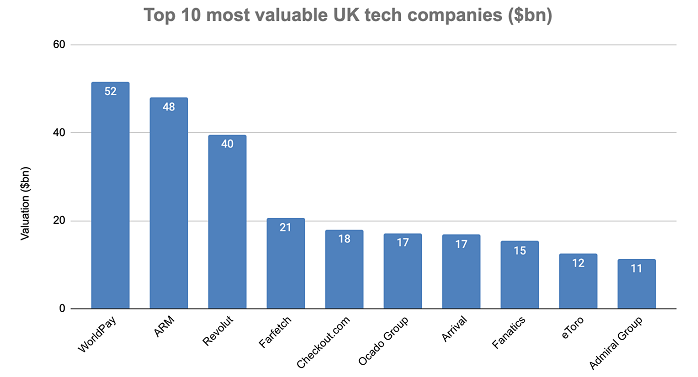 New analysis finds that the UK ranks third in the world for its number of tech businesses valued above $10bn.

New data released by Tech Nation, the UK’s tech scaleup experts, and Dealroom analyses the UK’s position on the global tech stage in comparison to the US and China. Analysis finds that the UK ranks third in the world for its number of tech businesses valued above $10bn.

The UK ranks third globally for its number of decacorns

The UK ranks third globally for its number of $10bn tech businesses, with 12 in total, behind the US, with 157, and China, with 38. Demonstrating growing momentum within the UK’s late-stage tech sector, the UK has doubled its number of companies at this stage in 6 months alone, with 7 companies reaching $10 billion valuations in 2021; Revolut, Wise, Arrival, eToro, Checkout.com, Farfetch, and Ocado.

The UK’s new decacorns hail from a variety of tech sub-sectors, including cleantech, fintech, insurtech and e-commerce. Through 2020 and 2021, the rapid growth of the UK’s highest-value tech companies was accelerated by changes to how companies access late-stage investment, and by the pandemic, as consumers began to rely on tech for food deliveries, access to healthcare and solutions to social challenges.

The growth of these UK tech companies was also expedited by changing national and global priorities, such as the UK’s push toward reducing carbon emissions and becoming net-zero by 2050, combined with the growing popularity of fintech, DeFi and cryptocurrencies. Looking forward, the UK government’s new fund to back R&D intensive companies will further support the growth of the UK’s most valuable tech businesses.

The UK’s growing number of decacorns reflects not only the rapid growth of the UK tech sector, but the opportunities the UK provides foreign entrepreneurs to build and scale successful new tech companies, and the role it plays as an incubator for world-class tech talent.

Six of this year’s seven newest decacorns’ founders are actually from outside the UK - hailing from Israel, Estonia, Portugal, Russia, Switzerland and the US. Only two of the UK’s 12 decacorns have all-British founding teams.

Dr George Windsor, Head of Insights at Tech Nation, said: “Through 2020 and 2021, the rapid growth of the UK’s highest-value tech companies was accelerated by the pandemic, as consumers began to rely increasingly on tech for food deliveries, healthcare and solutions to societal challenges.

“The growth of these high-value UK tech companies was also expedited by changing national and global priorities, such as the UK’s push towards reducing carbon emissions and becoming net zero by 2050, combined with the growing popularity of fintech, DeFi and cryptocurrencies. The UK is also a powerful tech incubator due to its commitment to helping startups scale and thrive.”

The UK is a tech incubator with a supportive ecosystem

The Start Here, Scale Here, Grow Here Report by Tech Nation demonstrates what is unique about the UK tech sector and highlights the key drivers of growth. Based on interviews with 10+ of the UK’s leading tech entrepreneurs, the report found that those who build businesses in the UK benefit from the UK’s strong heritage of innovation.

The Start Here, Scale Here, Grow Here Report also found that tech companies benefited from specific startup and scaleup tech policy, a favourable legal framework and active capital markets. It also highlights the UK’s position as a powerhouse for fintech and healthtech, with 10% of the global fintech market share and 25% of new medicines being invented in the UK.

Brent Hoberman CBE, Founder of Lastminute.com, said: “The rule of law is a bonus – it’s easier to set up, run and protect the IP of your business. Employment contracts are straightforward. E-commerce regs likewise. And shareholders’ agreements. It’s clear and it’s trusted.”

Sonali de Rycker, Venture Capitalist, said: “In the US, you have tech, Wall Street and Government thousands of miles and three time zones apart. Here, they are a 20 minute cab ride apart.”

Valuations of the UK’s Decacorns