Figures compiled by Tech Nation and Dealroom for the Digital Economy Council show that investors continue to back some of the UK’s most promising tech teams, despite the challenges posed by COVID-19. 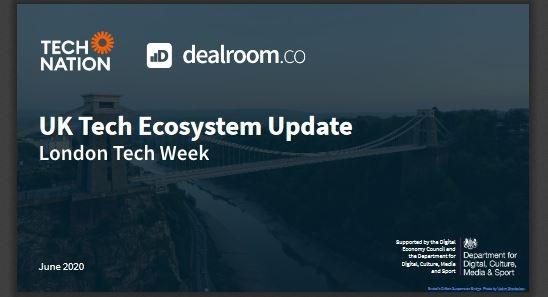 As members of the UK tech sector meet virtually during #LTWConnects events, figures show UK digital tech companies are continuing to attract investment, are still advertising vacancies and are optimistic that they can navigate the crisis. On measures including investment raised by companies and capital raised by investors, which will help sustain the sector for the long term, the UK outperforms all of its European neighbours.

Just as the 2008 financial crisis triggered an entrepreneurship boom in the UK, from which Silicon Roundabout’s cluster of startups has grown into a nationwide network of more than 35,000 businesses, the report demonstrates that UK tech is resilient and has deep foundations to emerge strongly from the crisis. Tens of thousands of jobs were advertised in cities across the UK in 2019 and the start of 2020, with salaries continuing to grow well-above inflation in almost all regions.

The UK capital continues to lead the way and is now established as a global tech leader with London-based companies raising $4bn since the start of January, more than Paris, Stockholm, Berlin and Tel Aviv combined. Fintech dominates fundraising in the capital, accounting for 39% of 2020 fundraisings. Enterprise software companies raised a fifth of the money invested in the first five months of the year.

Digital Secretary Oliver Dowden said: "The UK's tech sector has shown resilience in these challenging times and the levels of investment in the year to date have consolidated our Europe-leading position.

"We have a vast pool of talent in the country's digital and tech firms who have played a big part in supporting communities across the UK and beyond throughout the pandemic and I applaud them for their ongoing efforts.

"The government will continue to champion and support the sector as it navigates the months to come as we step up our Coronavirus recovery plans. We will back entrepreneurs, encourage innovators and help businesses make the most out of the opportunities the digital and tech world provides."

The UK’s tech sector went into the coronavirus crisis in February in a strong position. From January to the end of May, tech companies raised $5.3bn, compared to a total raised in the rest of Europe of $4.1bn. However, there are concerns that many of these deals were agreed in principle before the onset of the virus, which has reset expectations. Capital inflows in the second half of the year are unlikely to be as strong as those in 2019, itself a record year.

In April, the Government unveiled its Future Fund of £250m of matched funding for startups, so that tech companies which are typically loss-making could access support. Equity backed small businesses right across the UK are developing vital innovative products and services that have the capacity to help the growth of our economy in the months ahead as we emerge into economic recovery. Yet many of these businesses need further support and investment to withstand the impact of the coronavirus crisis to ensure that they can survive and successfully continue to build and commercialise their innovations.

In the first 12 days of the scheme, 464 applications were received from companies. Small and medium-size businesses focusing on research and development will also benefit from £750m of grants and loans, through which the Government is demonstrating its support for the innovative companies and technologies that are breaking new ground and will spur the country’s recovery from the pandemic.

The coronavirus crisis has underlined the crucial role that technology plays in our society and our economy - from keeping us connected to workplaces, friends, family and colleagues, to allowing us to order shopping and prescriptions to our doorsteps. Measures to curb the spread of the virus have accelerated digital adoption and social distancing is expected to continue this trend in 2020.

However, startups are fragile businesses and recent data gathered from 200+ companies for the venture capital community shows that:

Over the past 12 months, UK tech has built on a decade of consistent growth in which more unicorns were created than in any other country. Since last year’s London Tech Week, seven more companies have achieved ‘unicorn’ status - a privately-owned tech business with a value of at least $1bn - taking the UK’s total to 79 – twice the number of unicorns produced by second-place Germany, on 32. Similarly, the UK has 109 potential unicorns compared to half that number in Germany (58) and France (57). On a city level, London has 66 potential unicorns, 80% more than its nearest competitor, Paris (36).

Tech for Everyone - People, Places, Sectors

UK tech now employs more than 2.93 million people across the country with salaries that are, on average, £10k higher than other sectors. Salaries climbed between 3% and 9% in most tech clusters in 2019, with Bristol seeing salaries on average 13% higher.

Advertised vacancies were continuing to climb at the start of 2020 before the coronavirus and lockdown took its toll. Even so, more than 90,000 tech sector jobs were being advertised at the end of April. This is twice the number of openings in accounting and finance, the next sector with the most vacancies.

Although London is still a key driver of digital tech jobs and growth – accounting for 53% of advertised roles in 2019 and offering the highest average salaries – tech hubs in Manchester, Bristol and Leeds are continuing to thrive, as evidenced by Bristol’s unicorn Graphcore which raised $150m in February, Partnerize of Newcastle raising $50m in January, ANNA Money of Cardiff raising $21m in May and Peak, of Manchester raising $11.8m in April.

However, there is a risk of the crisis deepening regional disparities in the UK particularly around access to finance. National and local interventions need to be targeted to ensure the whole country has access to the support required.

The report’s findings also show that the UK - which has established leadership in fintech, deeptech and AI - is seeing other sectors gaining in traction, including healthtech, energytech and edtech.

Another strength is the UK’s thriving VC tech community. From January to June 2020, new funds amassed $5bn, almost as much as the $5.4bn raised throughout the whole of 2019.

Since 2018, the UK has had more investment from the US and Asia than any other country in Europe, with foreign investment generally making up 67% of the UK’s total investment. The UK also has a strong foundation of domestic investment (38%) which underpins its attractiveness to global investors. In contrast Germany’s tech sector is only 28% funded from domestic investors, which could be a weakness in the months to come.

Cindy Rose, UK CEO, Microsoft:, commented: “These numbers reflect the inherent strength of the UK tech sector and reinforce my strong belief that the UK remains an attractive destination to start and grow a successful digital business. Undoubtedly, there are economic headwinds ahead, but with our world class talent, strong start-up ecosystem and the accelerated pace of technology adoption in the UK, I'm confident the UK tech sector will emerge strongly from this crisis and be a key factor in driving inclusive economic growth and recovery.”

Sabby Gill, Managing Director, UK and Ireland, Sage: “Covid-19 has shown how digitally enabled businesses are more resilient and agile, and 28 % of SMBs are starting to conduct business online in direct response to the pandemic.  Government and industry must work together now to support SMBs on the digital transformation journey to fuel the economic recovery.”

Nicola Mendelsohn, VP EMEA, Facebook: “As highlighted by this report, the UK tech sector continues to flourish, evolve and grow year-on-year, cementing its place on the global stage. Given the current pandemic, it’s important to recognise areas of opportunity such as tech, and equip businesses across the UK with the tools and resources to accelerate their digital transformation so they can re-emerge and recover from this and future downturns.”

Baroness Martha Lane Fox, founder of Doteveryone: “Resilience and agility is intrinsic to tech startups and founders. Having to face, and respond, to challenges is something that is inherent in any entrepreneur and with so many amazing companies in the UK, this puts our tech scene in a strong position for the months and years ahead.”

Marta Krupinska, Head of Google for Startups UK: “The UK’s success and position as a global technology leader is dependent on its vibrant startup ecosystem. These are particularly challenging times for UK founders as their ability to adapt and even scale to support national services is being tested everyday. Now more than ever, it's important that we focus on spreading the wealth of talent and access to funding throughout the UK so that these incredibly impactful startups can continue to play a pivotal role in tackling the current challenges faced in the UK and beyond.”

Gerard Grech, chief executive of Tech Nation: “Many businesses are adapting and innovating to support the fight against coronavirus, demonstrating the resilience and resourcefulness of the UK tech sector. Although we are seeing many tech companies closing key rounds of funding, the picture is being monitored closely at Tech Nation, especially across different parts of the country, where access to finance may not be as strong. These findings today confirm that the UK is well positioned to face the challenges that lie ahead and leave Covid-19 in a position of strength.”

Will Shu, CEO & co-founder of Deliveroo: "Deliveroo is proudly British-born and British-based, and these figures underline the strength of the UK tech sector. However, the investment we have received to date has relied in large part on investors seeing the UK as open to innovation and pro-tech. Now more than ever it is vital that this remains the case, with a stable regulatory environment that welcomes large scale investments.”